Happy post-Thanksgiving weekend, everyone! I hope you all had a lovely holiday, and if you ventured out to the shops yesterday you didn't get crushed by the crowds. :) I stayed safely home and did my shopping online, and then I brought in the boxes of Christmas decorations. I love that part of the holidays.

I'm also thankful to be doing these Heroine of the Weekend posts! They can be a lot of work, gathering the research and pulling it together, but I've learned so much about a variety of interesting and inspirational women. I can't wait to see who pops up here in 2011!

This weekend's Heroine is Augusta Ada King, Countess of Lovelace (usually called Ada Lovelace), daughter of Lord Byron and mathematician supreme (she's sometimes called "the world's first computer programmer"). She died on November 27, 1852, long before Microsoft was even a gleam.

She was born December 10, 1815, the only child of the brief and ill-fated marriage between Byron and his wife Annabella Milbanke, Baroness Wentworth. She was named after Augusta Leigh, Byron's half-sister (whom he may or may not have been having an affair with, scandalous!), but called Ada by everyone. She never knew her father. Her mother left the couple's London house on January 16, only a month after Ada's birth, taking the baby with her to her parents' home at Kirkby Mallory. Though fathers were always given custody in those days, Annabella and her family were very powerful and had strong ammunition in their scandalous allegations against him. In April, Byron signed the Deed of Separation giving custody to his wife, and left England. He died when Ada was 9, and never saw her again, but his legacy always had a powerful hold on her.

In childhood, Ada was often ill, with severe headaches and stomach troubles, and a bout of measles in 1829 that left her temporarily paralyzed. Her mother was not a kind and soft mummy; she was determined to root out the Byron evil from her daughter and save her from that family's insanity, and decided her own passion of mathematics would do it (Byron called Annabella "the princess of parallelograms"). Ada was given tutors in math and science from a young age, including the well-known Augustus De Morgan. He wrote to her mother that Ada's skill could make her "an original mathematical investigator, perhaps of first-rate eminence." (As someone who struggled with math in school, I am in complete awe of her!)

By 1834, Ada had made her debut and was a regular at the Royal Court, much admired by almost everyone who met her. In July 1835 she married William King, Baron King, later the first Earl of Lovelace. Lady Lovelace's new estate was at Ockham Park in Surrey, and she went on to have 3 children, Byron, Anne Isabella, and Ralph Gordon. But Ada's ill health continued, especially after the births, though she had a wide circle of intellectual friends, including scientist Mary Somerville, and Charles Dickens. 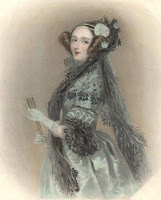 Mary Somerville introduced Ada to Charles Babbage, who became very impressed with her intellect and skills at writing and numbers. He called her "the enchantress of numbers," and in 1842-43 she worked on translating his work on an early mechanical general purpose computer (his Difference Engine), adding her own notes. The notes actually became longer that the work itself, and she has a section with a detailed method for calculating a sequence of Bernoulli numbers with the engine. Modern mathematicians say it would have run entirely correctly if the engine was ever built, and this is sometimes called the world's first computer program.

She died at 36 of uterine cancer, and was buried next to the father she never knew at the Church of St. Mary Magdalene in Hucknall. Her legacy still lives on, though. The US Department of Defense's computer language is called "Ada," since 1998 the British Computer Society has awarded a medal in her name, and in 2008 started a competition for female students in computer science. March 24 has been named Ada Lovelace Day to celebrate the achievements of women in the sciences (I participated in this day myself last year, with a post on Mme. de Chatelet!)

Fascinating, Amanda! What a marvelous woman. I remembered something about her and Babbage, but your post fleshed out my memory of her. Thanks!