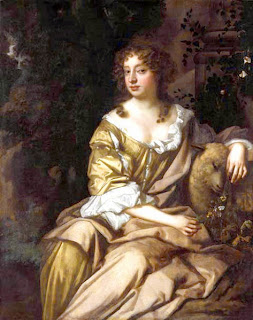 Today's heroine is "pretty, witty" (according to Pepys!) Nell Gwyn, actress and royal mistress, who died on November 14, 1687.

Little is known about her earliest life, except she was born around February 1650 to a mother named Eleanor (or Helen) Gwyn of the parish of St. Martin in the Fields, and a captain in the Cavalier army. It's not even certain where she was born, and three places make the claim--Hereford, London in Covent Garden, and Oxford. It's thought her mother kept a bawdy house (and possibly was an alcoholic), but Nell later declared when called a whore, "I was but one man's whore, though I was brought up in a bawdy house; and you are a whore to three or four, though a Presbyter's praying daughter!" (again according to Pepys).

Around 1662-3 she took a lover named Duncan or Dungan, who provided her with a room in Maypole Alley and may have helped her get a job at a theater being built nearby. They were together perhaps two years or so. At this time, Charles II was restored to the throne and frivolities that were banned under the Puritans (like the theater) were roaring back to life. Women were also allowed to act on the stage for the first time, but Nell's first job there wasn't as actress but as orange girl, working for a bawd named Orange Meg who had a license to "vend, utter and sell oranges, lemons, fruit, sweetmeats" in the theaters. Orange girls would also serve as messengers between men in the audience and the actresses. After about a year of this, she became an actress herself thanks to her pretty looks, clear voice, and fearless wit (and a judiciously chosen lover or two!). She was determined to succeed in a very competitive field, and worked hard to memorize her lines despite being illiterate.

She made her debut as Cydaria in John Dryden's The Indian Emperour, but she felt the drama didn't suit her. It was comedy that would make her a star, when she appeared in May 1665 in All Mistaken, or the Mad Couple as one of a typical Restoration theatrical couple of witty, argumentative lovers. She was a big hit, but the theaters were closed by an outbreak of the plague later in the summer. Nell and her mother spent those months on Oxford, where the royal court had taken refuge. They ordered theatrical entertainments while there, and she may have appeared.

Once the theaters reopened, Nell embarked on a series of her witty comic roles, many of them "breeches" parts that showed off her pretty legs. In 1667 she became the mistress of a Court wit named Charles, Lord Buckhurst, a passionate affair that was quickly over. The affair with Charles II was said to have begun in April 1668 (an anecdote says he invited her to supper after the theater with a party that included his brother James, Duke of York, but at the end they realized they had no money with them. Nell declared "Od's fish, but this is the poorest company I ever was in!"). She continued to act despite her new position. 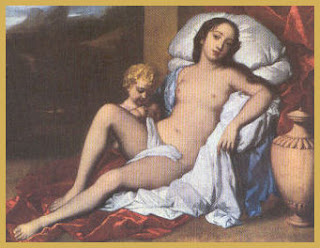 She gave birth to her first child with Charles, a son named Charles, in May 1670 (by some counts the king's 7th son), but she had many rivals for his affections, including his longest-standing mistress Barbara Palmer and the newly arrived Frenchwoman Louise de Keroualle (who Nell called "Squintabella" and "Weeping Willow"--they were great rivals for years, though they also often had tea and played cards together). In 1671 Nell retired from the stage and moved into a fine house at 79 Pall Mall, where she would live for the rest of her life. In 1681 she had a second son with the king, James, who would die in Paris at the age of about 10. The boys were known by the last name Beauclerc and given titles of earls and dukes.

King Charles died in February 1685, entreating his brother "Let not poor Nelly starve," and Nell was given a pension. She didn't live long to enjoy it though, dying at 37 years old in 1687 of a stroke. She was buried at the Church of St. Martin in the Fields. She was remembered for her great wit, her beauty, and her kindness.

Some sources on her life and times:
Charles Beauclerk (her descendant!), Nell Gwyn: Mistress to a King (2005)
Elizabeth Howe, The First English Actresses: Women and Drama 1660-1700 (1992)
Derek Parker, Nell Gwyn (2000)
Posted by Amanda McCabe/Amanda Carmack/Laurel McKee at 1:10 AM