Since we had our first Hottie Monday of the year this week, we have to follow up with the first Heroine of the Weekend for 2011! Our Heroine is dancer and choreographer Bronislava Nijinska, born on January 8, 1891.

Bronislava was usually overshadowed by her more famous/notorious brother Vaslav Nijinksy, but she had a great career in her own right. She was born in Minsk, the third child of dancers, and was 4 when she made her dancing debut, and at 7 was accepted (along with her brother) to the Imperial Ballet School in St. Petersburg. She studied there for 7 years and graduated with honors, becoming a dancer at the famed Marinsky Theater in 1908. She stayed there until 1910 (resigning when her brother was kicked out of the company), when she was invited by Serge Diaghilev to join his revolutionary Ballets Russes in Paris. There she became a choreographer as well as a dancer, studying under Michel Fokine and creating roles in ballets such as Petrouchka and Carnival.

In 1913 there was a short-lived attempt to create a company with her brother, and she returned to Russia the next year, creating her first ballet Tabakerka, and after the war opened her own school in Kiev, where her star pupil was Serge Lifar. She left Russia in 1921 to rejoin the Ballets Russes as choreographer, working with Stravinsky on some of her ballets such as Renard (1922) and Les Noces (1923). Her best known work was Le Train Bleu, a ballet about Paris Society on the Riviera, which utilized stylized games of tennis, golf, and beachy, modern costumes (she took a role in the debut as well). Chanel did the costumes, Milhaud the music, and Picasso the stage designs. It was great hit and watershed in the modern arts. (She had also appeared in another modern landmark, her brother's production of L'apres midi d'un faune, and went on to be his guardian and protector as he lived out his life in madness).

In the late '20s and 1930s she moved from company to company, including her own Polish Ballets of Paris, and also directed the choreography of the film version of A Midsummer Night's Dream (1935). In 1938 she moved to Los Angeles and opened her own school as well as collaborating with such companies as American Ballet Theater and the Royal Ballet in London. Her students included Cyd Charisse and Maria Tallchief, among others. 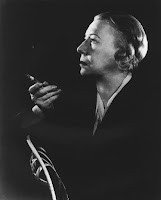 In her private life, Nijinska was married twice, to dancer Alexander Kochetovsky, with whom she had 2 children Leo and Irina (who also became a dancer), but her true love was opera singer Feodor Chaliapin, though they never married. She died in California on February 22, 1972.

Labels: Ballet, Heroine of the Weekend