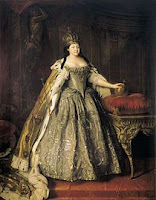 This weekend's Heroine post is one of those that is less "heroine" and more "interesting person in history"! We'll take a look at Empress Anna Ivanovna of Russia, who was born in Moscow on this day in 1693, the daughter of Ivan V and niece of Peter the Great.

In the tradition of the day, she grew up with her mother and sisters in almost completely female company in the women's quarters of the palaces, but she was not completely uneducated. She studied reading and writing, German and French, dancing and court procedure, as most princesses did, but she grew up shy and clumsy and not very pretty (not much of a prize in the European marriage market at the time!). But she was tall, with a strong voice that projected authority and lovely dark eyes.

In 1709 her uncle Peter started marrying off his nieces and nephews to European royalty in his quest to expand Russia's prestige and power. Anna was married off to Frederick Wilhelm, Duke of Courland, in November 1710 at the Menshikov Palace in St. Petersburg, a lavish celebration including a vast amount of drink and the wedding of two dwarves (the Russian royal family of this time seems to have had a strange interest in dwarves--Peter hoped to breed a whole race of small people and had them "imported" from all over Russia to his new city of St. Petersburg). But the duke died on the journey home a month later, leaving Anna a widow. Peter ordered Anna to go to Courland and become its ruler.

Peter gave her an allowance of 40,000 rubles a year, not nearly enough to run a country (even a tiny one), and she was constantly forced to go begging to her uncle and his wife. She grew increasingly bitter in her exile. In January 1730 Peter died, and the privy council offered the throne to Anna (with limitations on her power--she could not declare war, set taxes, sign death sentences, and give out honors and estates without council permission. Where's the fun of being queen with all that??). She was greeted in Moscow by a group of noblemen who petitioned her to reject the conditions and rule as a proper Russian autocrat. She then repudiated the conditions and imprisoned the council members. She was crowned at the Dormition Cathderal on April 28. 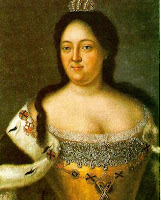 Though she was meant to rule Russia herself with the aid of a cabinet of 5, she actually left most of the work to her lover Ernst von Biron. Not surprisingly, this was a period of expanding German influence in Russia, while she made up for her impoverished past with a lavish lifestyle in St. Petersburg. She liked balls, theater, card games, and hunting, and shared her uncle's strange passion for dwarves and clowns. She also loved setting up weddings for her courtiers, including one famous instance where an elderly prince was forced to marry one of her maids, dressed up like clowns in an ice palace in the middle of winter. (Hilarious--not!). This was all paid for with higher and higher taxes and the strengthening of serfdom. She also embroiled Russia in such quarrels as the War of the Polish Succession.

Luckily she was not empress for too long. She died in October 1740 from complications of a kidney stone and was buried at the Cathedral of St. Peter and St. Paul. Her designated heir, her great-nephew Ivan VI, was only a year old at the time, and his mother Anna Leopoldovna was appointed regent with the aid of Biron and Anna's other German councilors. But the Russians had had enough of the Germans, and Peter the Great's daughter Elizabeth was put on the throne in his place, imprisoning the infant Ivan and exiling his mother.

Some sources on this tumultuous period in Russian history are:
Ronald Hingley, The Tsars: 1533-1917 (1968)
W. Bruce Lincoln, The Romanovs: Autocrats of all the Russias (1981)
Posted by Amanda McCabe/Amanda Carmack/Laurel McKee at 7:19 AM