Our Heroine of the Weekend is a bit late today, thanks to my birthday festivities yesterday! If we have to get older, we might as well have some fun doing it, and I had a lovely lunch out and a dinner with family and friends. Now back to work today! :)

Our Heroine is Sonya (or Sofia) Kovalevsky, a Russian mathematician born on January 15, 1850. She was born in Moscow, the middle of 3 children of an officer in the Imperial Army and a scholarly mother. Her parents encouraged her early love of mathematics and hired tutors for her. Her sister was also gifted, and published a story in a magazine edited by Dostoevsky. But higher education in Russia was closed to her, so in order to go abroad to a university (a woman required permission from a father or husband to do this, and her father did not want her to go) she contracted a (possibly fake) marriage to Vladimir Kovalesvky, a paleontology student who would later work with Darwin. She left Russia with him in 1867 to attend the University of Heidelberg.

Later the couple would visit London and become involved in intellectual circles, including being regulars at the salon of George Eliot. After 2 years at Heidelberg Sonya went on to Berlin to continue her studies and research of her own on such subjects as partial differential equations and elliptic integrals (I am not even sure what these are...), and earned her doctorate in mathematics at a high when most women never even considered higher education. Her dissertation on partial differential equations is now known as the Cauchy-Kovalevski theorem. 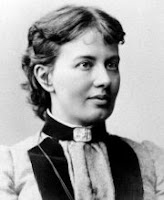 She and her husband then returned to Russia but couldn't find professorships because they were considered radicals for their political beliefs and their time in Germany. They returned to Germany, where a daughter Sofia, of "Fufa," was born. After a few separations, Sonya left her daughter in the care of her sister and left her husband for good. In 1883 he committed suicide. Sonya went on to secure a teaching position in Stockholm and in 1884 became editor of Acta Mathematica. In 1888 she won the Prix Bordin of the French Academy of Science and the next year was appointed Professor Ordinarius at Stockholm University, possibly the first woman to hold such a position. She was also later granted a Chair in the Russian Academy of Sciences, but never given a professorial position in her own country.

A few sources on her life include:
Her own memoir, A Russian Childhood
Ann Hibner Koblitz, A Convergence of Lives: Sofia Kovalevskaya--Scientist, Writer, Revolutionary (1983)
A novel by Joan Spicci, Beyond the Limit (2002)
Posted by Amanda McCabe/Amanda Carmack/Laurel McKee at 7:38 AM