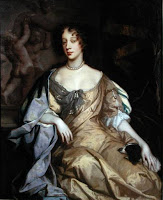 And now back to our Heroines! This weekend we're still on the royal trend, with a look at Queen Mary of Modena, who died on May 7 in 1718.

She was born Maria Beatrice Anna Margherita Isabella d'Este on October 5, 1658, the eldest child of Alfonso IV, Duke of Modena in Italy. Her father died when she was 4 and her mother Duchess Laura became regent for her only brother Francesco. Mary was said to be well-educated, speaking French, Italian, English, and Latin, as well as being tall and very pretty. It was thought for a time she would marry Charles II of Spain, but in the end was wed to James, Duke of York, by proxy on September 30, 1673.

James wasn't the ideal husband for a pretty young woman. He was 25 years older than Mary, a widower with two near-grown, tempermental daughters, Mary and Anne, and a known womanizer. Her marriage was also extremely unpopular in Protestant England. She was called "the Pope's Daughter" in the tabloids of the day, and the Protestant Parliament threatened to annull the marriage until Charles II stepped in on his brother's behalf and suspended Parliament until January 1674. The marriage stood, and eventually Mary found a way to get along with her husband. Their first child, Catherine Laura, was born in January 1675, but sadly proved to be the first in a long line of children to die in infancy.

After the duchess's Catholif secretary was embroiled in the trumped-up "Popish Plot" to kill the king in 1678, the Yorks were exiled to Brussels and later to Edinburgh. Separated from her only living child Princess Isabella (who died in 1681), faced with her husband's affair with Catherine Sedley, she grew depressed. But by May 1682 they were back at Court. She became queen on the death of Charles II in February 1685. Their lavish joint coronation (the first since Henry VIII and Catherine of Aragon) cost 119,000 pounds, and Mary's crown can still be seen at the Tower.

She was still in bad health, at times so much so that there was much speculation in Europe as to who her husband might wed next. But she rallied, and after a visit to Bath in 1687 she was pregnant again. This time the baby was a healthy boy, Prince James. A rumor spread that the real royal baby died and a replacement was smuggled in via warming pan, a ridiculous tale that was still much believed (and spread by Princess Anne). The furor over the royal couple's Catholicism and the prospect of a Catholic heir led to the Glorious Revolution, and Princess Mary and her husband William of Orange taking over the English throne while James and Mary fled to France.

Mary was called the "Queen Over the Water" by their Jacobite supporters, and settled into life in Louis XIV's France. She was very popular at Versailles. Madame de Sevigne proclaimed her "distinguished bearing and quick wit." (James meanwhile was excluded from most of the fun, as he was considered quite dull!). James suffered his final defeat at the Battle of the Boyne in 1690 (Mary had helped finance the campaign by selling her jewels). Their last child, Princess Louise Mary, was born in 1692. The couple went on living in France with their children, though despite a generous income from Louis they were often broke (Mary had a habit of supporting Jacobite exiles). 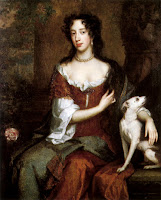 James suffered a stroke in March 1701 and died on September 16. Louis XIV then proclaimed young James the King of England (much to King William's ire) and Mary as his regent, a post which ended when her son turned 16. She disliked politics and was stressed and depressed by the turmoil around her. After her son was exiled from France under the terms of the Treaty of Utrecht and her daughte died in 1712, she lived quietly in poverty at the convent at Chaillot until her death in 1718. She was buried among the nuns.

Some sources on her life:
--Martin Haile, Queen Mary of Modena: Her Life and Letters (1905)
--Tim Harris, Revolution: The Great Crisis of the British Monarchy, 1685-1720 (2007)
--Carola Oman, Mary of Modena (1962)
--Maureen Waller, Ungrateful Daughters: The Stuart Princesses Who Stole Their Fathers Crown (2002)
Posted by Amanda McCabe/Amanda Carmack/Laurel McKee at 12:55 AM