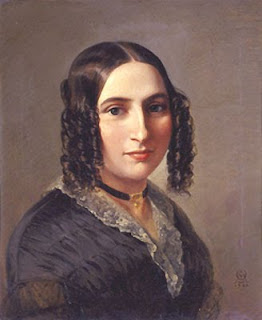 Happy weekend everyone! (It is still the weekend, right??) Our Heroine this week is composer/musician Fanny Mendelssohn Hensel, who died on May 14, 1847.

Fanny was born November 14, 1805 in Hamburg, the oldest of 4 children, part of a distinguished Jewish family (her grandfather was philosopher Moses Mendelssohn, and her father Abraham ran a prosperous business). Unlike her equally precocious brother Felix, she was not encouraged to pursue her talent for music and composing (he was given the finest teachers, while Fanny had to learn the best she could herself), but she was passionate about music and as talented as her brother from a very young age. (Her father later wrote to her, "Music will perhaps become his profession, while for you it can and must be only an ornament"--pretty much sums up the attitude of the day). But Felix did help her publish some of her works under her own name.

In 1829, after a long courtship, she married artist Wilhelm Hensel, who was luckily very supportive of his wife' s music. (The couple had one child, Sebastian, the year after their marriage). She took part in her family's famous Sunday afternoon concerts (which she took over hosting after her father's death), where many of her pieces were played and discussed. In 1838 she had her one (known) public performance, of her brother's Piano Concerto No. 1. In all she composed some 466 pieces, mostly for the piano, including a song cycle titled Das Jahr (The Year), an amazing output considering her lack of support and encouragement and the expectation that she would always put her home and family first.

Fanny died of a stroke at the young age of 42, in Berlin in 1847. (Her brother died the following year). Her works have become more widely known and played in just the last few years, thanks to new interest in female composers.