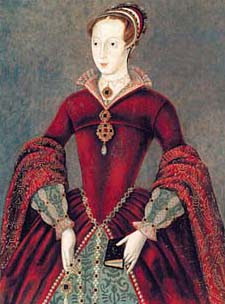 So the weekend is almost over (I am not sure where it went! Probably frittered away dealing with an AC that decided to die right when the temps reached the 90s here...), but we can't let it pass without a Heroine. And I can't believe I've never featured Lady Jane Grey before! She was married on May 21, 1553, so she is our (tragic) Heroine this weekend.

Jane was born sometime in 1536 or '37 (there is some doubt to the exact date) at her family's home at Bradgate Park in Leicestershire. Her parents were Henry Grey, the 1st Duke of Suffolk, and Lady Frances Brandon, the niece of Henry VIII through her mother Mary Brandon. The couple had three daughters, studious Jane, beautiful Catherine, and deformed Mary, all of whom would run afoul of their Tudor cousins.

Jane was very well-educated according to the classical model of the day (it was speculated that her parents were preparing her to one day marry her cousin Prince Edward0. She knew modern languages, as well as Latin, Greek, and Hebrew, and was instructed in the new reformed Protestant religion, which she was quite devoted to. She prefered studying to hunting or dancing, and was from all reports a serious young lady. In 1546 she went to join the household of Catherine Parr, the dowager queen and widow of Henry VIII, where she would be educated in humanist, Protestant thought along with her royal cousins. (Jane was the chief mourner at Catherine's funeral in 1548).

After she left Catherine Parr's care, Jane was married to Guildford Dudley, the son of the Duke of Northumberland (one of the most powerful men in England). It was a lavish triple ceremony--her sister Catherine also married, to the heir of the Earl of Pembroke, and Guildford's sister Catherine married the heri to the Earl of Huntingdon. It was a huge power play for the two fathers Suffolk and Northumberland. The reasons for it all soon became clear.

When Henry VIII died his Act of Succession laid out his plans for the future of the throne. If Edward was to die without an heir, the throne would then pass to Henry's two perviously disowned daughters, Mary and Elizabeth. If they died without issue, it would then go to his sister Mary's descendants (the Greys), bypassing his sister Margaret's Scottish line (inlcuding Margaret's granddaughter Mary Queen of Scots). But Edward, who was very ill by the beginning of 1553, laid out his own "Device"--he excluded his sisters altogether (Mary was a devout Catholic, at odds with her strictly Protestant brother throughout his reign; leaving out Elizabeth is more puzzling). He instead directed the succession through Frances Brandon's line, hopefully to Jane's soon-to-be-produced male children. Edward died on July 6, 1553, and everyone sprang into action.

Four days later the king's will was revealed and Jane was proclaimed Queen to shocked Londoners. Jane went in procession to the security of the Tower to await her coronation. A Genoese in London, Baptista Spinola, watched her walk past and described her as "very short and thin, but prettily-shaped and graceful. She has small features and a well-made nose, the mouth flexible and the lips red."

Northumberland's first task to secure his daughter-in-law's reign (even though she had refused to name Guildford king) was to isolate and secure Mary, who naturally expected to be queen. But she had escaped and was rallying her supporters. He rode out of London with his troops on July 14, and while he was gone the Privy Council changed their tune. They saw the wind was blowing toward support of Mary, and the proclaimed her queen to much rejoicing July 19. Jane's palace turned into a prison at the Tower, and Mary entered London in a triumphant procession on August 3. Northumberland was executed August 22. 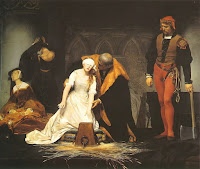 Even though Jane and her husband were tried, found guilty of treason, and sentenced to death, they were not executed until February 12, 1554. Guildford was beheaded on Tower Hill, but Jane was given the rare privilege of a private execution at Tower Green. She was only 16 or 17 years old, but she faced her death with rare bravery and calm, with only flahs of panic when she was blindfolded and couldn't find the block. She made a short speech:

Good people, I am come hither to die, and by a law I am condemned to the same. The fact, indeed, against the Queen's highness was unlawful, and the consenting thereunto by me: but touching the procurement and desire thereof by me or on my behalf, I do wash my hands thereof in innocency, before God, and the face of you, good Christian people, this day.

With only a few last words, ""Lord, into thy hands I commend my spirit," she held out her arms and was killed. Over the centuries, her youth and innocence have given rise to many romantic images and legends.

A few sources on her life:

(And for a more detailed explanation of Edward VI's very complicated Device, you can look here)
Posted by Amanda McCabe/Amanda Carmack/Laurel McKee at 8:15 PM

Lady Jane is my favorite figure from this era. Some question her innocence in her rise to the thrown, but I think she's tragic just the same. Definitely not your typical teenager!