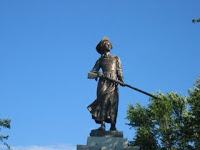 When I was searching for a heroine to look at this weekend, I found out that today is the anniversary of the death of Madeleine De Vercheres (March 3, 1678--August 8, 1747), a woman I had never heard of but who was known as a great heroine of New France. Her story was very intriguing!

Madeleine was the daughter of Francois Jarret and Marie Perrot, prosperous seigneurs at a fort in New France, or Quebec, Canada. The fort was nicknamed Le Chateau Dangereux due to its distant location (Montreal was a day's journey away). In the 1680s, hostilities broke out between the French and the Iriquois tribe, after the French built strong trading alliances with the Alqonquins and the Iriquois found themselves losing out on the lucrative fur trade. The English were also at war with the French (as they so often were), so the Iriquois formed an alliance with them. Madeleine's parents knew their outpost at Vercheres, Queben would be a target, so they made fortifications and preparations. When Madeleine was 12, the attack came, and her mother was alone with only 4 men to defend the fort and her family, but Marie De Vercheres held off the attack for 2 days before reinforcements arrived (and excellent example for her daughter!)

In 1691, the Iriquois attacks resumed. In the fall of that year, Madeleine's parents left the fort to gather winter supplies during a lull in the fighting, leaving Madeleine and her siblings. Now 14, and the eldest, Madeleine was in charge, with one old man and 2 soldiers to help her. One morning (the story goes) Madeleine and some of the settlers left the fort to tend the fields. She was in a cabbage patch, near the walls of the fort, when the Iriquois descended on them. She ran into the fort, barely ahead of a warrior chasing her, shouting "Aux armes! Aux armes!"

She dashed up to the walkways, firing a musket and making as much noise as she could to make the attackers think there were more soldiers defending the fort. Then she fired off the cannon to summon reinforcements from other forts not too far away. The Iriquois, their plans for an easy sneak attack thwarted, retreated into the forest with a few prisoners. During the siege, Madeleine noticed a canoe approaching the fort landing witha settler family aboard. The soldiers refused to leave the walls, so Madeleine ran to the dock herself and led the family inside, pretending they were reinforcements. Later that evening, the fort's cattle returned home, and she suspected another sneak attack, which she also held off. 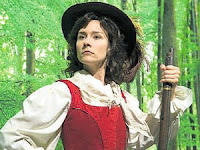 Troops from Montreal arrived soon after, catching the attackers and returning the captives. Madeleine's heroic actions were soon the talk of the colony, and she became a heroic symbol of the rise of French Canada.

Her father died in 1700, and his pension was transfered to Madeleine in honor of her bravery. She managed the fort until her marriage to Pierre Le Tarrieu in 1706, and they moved to his seigneury at Ste. Anne de la Perade, Quebec, where she died in 1747 and was buried beneath her pew in the church there.

A couple of good sources I found while reading up on her life:
Colin Coates and Cecilia Morgan, Heroines and History: Representations of Madeleine de Verchers and Laura Secord

Robert Leckie, A Few Acres of Snow: The Saga of the French and Indian Wars

(I also heard there was a silent film from 1922, Madeleine de Vercheres, but couldn't find much info about it. The statue of her was erected near Vercheres Point near Montreal in 1911)
Posted by Amanda McCabe/Amanda Carmack/Laurel McKee at 12:08 AM