This week's Heroine is an intriguing woman I just heard about (but I am definitely going to learn more!)--Judith Louise Gautier, whose birthday was last week (August 24, 1845--December 26, 1917). She was an author of "exotic novels" as well as non-fiction works on music, art, and the Far East, as well as the friend and/or lover of various artistic figures of her day.

Judith was the daughter of writer Theophile Gautier and Ernesta Grisi (sister of ballerina Carlotta Grisi), and in their home she was exposed from earliest childhood to an artistic and free-thinking circle. Some of her father's visitors were Banville, Flaubert, Goncourt, Baudelaire, Arsene Houssaye, and Gustave Dore. (Baudelaire nicknamed her "The hurricane," predicting she would "sink many"). For a time, her father helped out a Mandarin political refugee from China, Ding Dunling, which fostered her interest in Eastern culture.

She was encouraged in her own writings, and while still very young published her first article in Le Moniteur (which also published some of her poemns), a critique of Eureka's translation of Edgar Allen Poe. She also translated, copied, and adapted various books for publication, developing an expertise in the East, especially Japan.

She was also quite beautiful as well as being brainy, and had a wide range of admirers, including Victor Hugo and Richard Wagner. Hugo dedicated his poem "Ave, Dea: moriturus te salutat" to her ("Puisque vous etes belle et puisque je suis vieux"). She was also said to be one of Wagner's earliest admirers in France, and worked to make sure his music was discovered there. In 1866, she married Catulle Mendes (a writer and librettist--he wrote the libretto for Debussy's opera Roderique et Chimnen later in life). They traveled to visit the Wagners at Tribschen in 1869, and then again the following year.

In 1874, she separated from her husband (declaring he was neither a faithful husband nor a talented writer! She later married for a second time, to Pierro Lotti). By the time she attended the first Bayreuth festival, she was involved in an affair with composer Louis Benedictus, which did not discourage her ardent friendship with Wagner. It's unclear how far their relationship went physically, but it was quite passionate, including a clandestine correspondence until 1878, when Cosima Wagner discovered and burned many of the letters. Wagner saw her as a great muse, and she worked on many translations of his work into French, including the Parsifal libretto, writings on Wagnerian topics, and a 3-volume memoir. 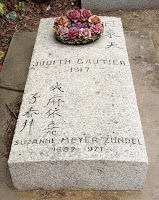 She was the first female member of the Goncourt Academy. She died at Saint-Enogat, near Dinard, in 1917. I was able to find info on one biography, Judith Gautier: A Biography by Joanna Richardson (1987).
Posted by Amanda McCabe/Amanda Carmack/Laurel McKee at 7:13 AM