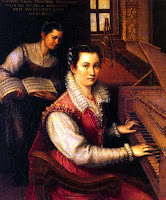 Today's heroine of the weekend is Italian Renaissance artist Lavinia Fontana, whose birthday falls on August 24! Fontana (August 24, 1552--August 11, 1614) was born in Bologna, the daughter of artist Prospero Fontana, who was her earliest teacher. (The few female artists of the time almost always had fathers or other close relatives who were artists, and thus were able to follow in the "family business").

Not a great deal is known about her early life. In 1577, she married Paolo Zappi and went on to have 11 children, though only 3 outlived her. Unusually, after her marriage she kept on with her painting to support the family and her husband took charge of the household. He also served as painting assistant to his wife, doing minor background elements like skies and draperies. (I would love to more about the family dynamics there!). They moved to Rome in 1603 at the invitation of Pope Clement VIII, where she prospered and gained many clients. She was elected into the Accademia di San Lucia of Rome (a rare honor for a woman) and died in that city in 1614. 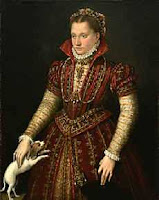 Her earliest known painting, Monkey Child, (1575) is now lost, but another work from around the same time, Christ with the Symbols of the Passion, can be found in the El Paso Museum of Art. Though religious art reigned supreme in this period, she worked ina variety of genres, and gained the most renown and income in painting portraits of upper-class denizens of Bologna and Rome.

Over the years, some of her portraits were sometimes wrongly attributed to Guido Reni, including The Virgin lifting a veil from the sleeping infant Christ and The Queen of Sheba visiting Solomon. Her famous self-portrait still belongs to her descendant, Count Zappi of Imola. Only 32 of her signed and dated works are known today, though over 100 are documented from early sources.

Some good sources on Fontana's life, and the careers of women artists of the time, are:
C.P. Murphy, Lavinia Fontana: A Painter and Her Patrons in Sixteenth Century Bologna
Whitney Chadwick, Women, Art, and Society
Anne Sutherland Harris and Linda Nochlin, Women Artists: 1550-1950 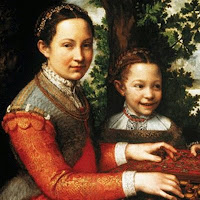 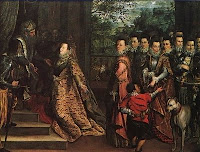 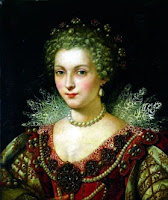 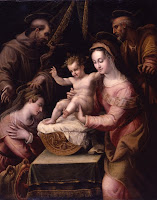 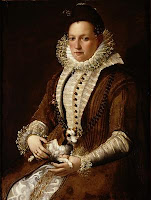 What a talent. Thanks for the lesson.

The second in the series of paintings, a young woman seated with a girl, is actually the work of Sophonisba Anguissola, who like Lavinia, with whom she was a contemporary, was a successful portrait artist. It's a detail from a portrait of herself (the young woman) and her family, entitled 'The Game of Chess.)