Our heroine this weekend is author Mary Astell, sometimes called "the first English feminist." (Some sources quote her birthdate as being December 12, 1666 and some say November--we're going to go with December!)

Not a great deal is known about Astell's life. According to Ruth Perry's bio, The Celebrated Mary Astell: An Early English Feminist (University of Chicago Press, 1986), "as a woman she had little or no business in the world of commerce, politics or law. She was born; she died; she owned a small house for some years; she kept a bank account; she helped to open a charity school in Chelsea." Only four of her letters still exist, yet she is still considered an important early advocate of women's education and independence.

She was born at Newcastle-upon-Tyne in 1666 to Peter and Mary Astell, who had two sons as well, one of which died in infancy and the other her younger brother Peter Junior. They were comfortably upper-middle-class (if there can be said to be such a thing at the time!), her father a conservative Royalist and devout Anglican who managed a coal company. Mary received most of her early education from her uncle, an ex-clergyman who wa suspended from the Church for drunkeness. Her father died when she was 12, leaving the family in financial straits, and Mary and her mother moved in with her aunt. 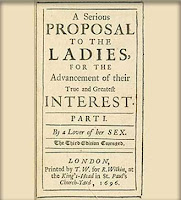 When the mother and aunt died in 1688, Astell moved to London and met with a circle of literary and intellectual ladies who all lived in the Chelsea area (such as Judith Drake, Lady Mary Chudleigh, Elizabeth Thomas, and Lady Mary Wortley Montagu), who encouraged her in her writing. She was also friends with the Archbishop of Canterbury, William Sancroft, well known for his charitable works. He helped her financially and introduced her to a publisher. Her 2 best-known works were A Serious Proposal to the Ladies, for the Advancement of Their True and Greatest Interest (1694) and A Serious Proposal, Part II (1697) dicuss her plan to establish a new kind of school for women, to assist them in achieving both secular and religious education. She discussed her hopes that all women should have the same opportunity as men to "spend eternity with God" and thus they needed to be educated to understand their experiences and beliefs. "If all Men are born free," she wrote, "why are all Women born slaves?"

Astell died May 11, 1731, after a mastectomy to remove a cancerous right breast. She refused in her final days to see anyone, staying alone in her dark room with her coffin to commune with God (or something like that).

A Serious Proposal to the Ladies is available in an edition from the Broadview Press. A few other sources are:
Christine Sutherland, The Eloquence of Mary Astell (2005)
Ed. William Kolbrener and Michael Michelson, Mary Astell: Reason, Gender, Faith (2007)
Posted by Amanda McCabe/Amanda Carmack/Laurel McKee at 12:47 AM

Excellent post Amanda. I had no idea that who she was before today. I love how so many women are considered to be the 'first' feminist.

I love it when I find people I "know" on other authors' blogs! Mary Astell is a very minor character in the historical novel I've just finished and am currently revising. I've had my head in her books and treatises for well over a year and she's become a king of heroine to me! Also, I'm the product of a women's college and she was such a proponent of providing 17th & 18th century females with the same classical education that their father's and brothers received.

LOL, Margaret! I love finding favorite historical people in blogs, too--it's sort of like running into an old friend unexpectedly. I first read about Mary in college, and haven't had a chance to re-encounter her until now.

Elizabeth--she DOES seem a bit late to be the very first feminist, doesn't she? :) I think it's probably an impossible claim to test

Great to find this discussion about Astell! I appreciate your appreciation. I'm the Michal (NOT Michael)Michelson, who co-edited the book Mary Astell: Reason, Gender, Faith, mentioned in the post, and have researched her for years. No, she's not actually the "first" feminist, but she was definitely an independent-minded woman. For a woman of her times to make a comment (in reference to John Locke)such as: "If all men are born free, how is it that all women are born slaves?" does sound like it was said yesterday rather than more than 300 years ago. Heart-warming to see the interest in her!