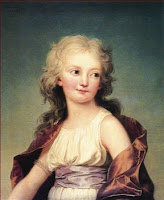 Our heroine of the weekend is Marie-Therese Charlotte, Madame Royale, duchesse d'Angouleme, daughter of Marie Antoinette and Louis XVI! She was born on December 19, 1778 at Versailles, the first child of the royal couple after 7 years of marriage (so there was a tremendous amount of anticipation around her birth!). It was the custom at Versailles for royal births to be in public, with the privileged members of the Court invited into the Queen's chamber. On December 19, the room was so packed with observers, and the birth was so arduous and lengthy, that Marie Antoinette fainted with suffocation and blood loss. A window had to be torn out so she could get a little fresh air and be revived. Thereafter, the births of royal children took place in greater privacy. The baby was named after the Queen's mother, the Austrian Empress, and given the official title Madame Royale. Her family nicknamed her Mousseline (Muslin), for her pretty, blonde appearance.

It's said that, despite the courtiers disappointment with the baby's gender, the Queen was delighted and declared, "Poor little girl; you are not what they wanted, but we will love you nonetheless. A son would have belonged to France; you shall be mine and have all my care. You shall share in my happiness and soften my sorrows." Marie-Therese was with her mother almost until the very end.

The new princess's household was led by a governess, comtesse de Rohan, was after her husband's disgrace was replaced by Marie Antoinette's friend the scandalous duchesse de Polignac. Her father was indulgent and affectionate, while her mother was stricter and determined her daughter would be a kind and compassionate child (she sometimes invited children from poor backgrounds to meet the princess, and encouraged her children to give their toys and alms to the poor). Eventually Marie-Therese had 2 brothers, Louis-Joseph-Xavier-Francois (b. 1781) and Louis-Charles (b. 1785), and a short-lived sister Sophie-Helene (b. 1786).

Her childhood at Versailles with her family and the Court was idyllic, full of ceremony and etiquette but also a great deal of freedom at her mother's Trianon (where she had her own little garden), but France was sliding into disaster. Terrible winters and bad harvests, along with a crippling budgetv deficit, led to immense suffering and hatred toward the ruling classes (especially the much-maligned and slandered Queen, accused in nasty pamphlets of spending the country into bankruptcy as well as sexual depravity). Not only the lower classes hated Marie Antoinette, but so did some factions at Court (many of which always resented the marriage of the Dauphin to an Austrian). As the country moved closer to the abyss, Marie-Therese was most affected by the deaths of two of her siblings, little Sophie and the Dauphin Louis-Joseph (in June 1789).

The Bastille was stormed on July 14, 1789, as the Court mourned the little Dauphin. Her uncles and great-aunts fled Versailles, along with Marie-Therese's governess, Polignac (who was deeply unpopular). Her new governess was the stern but effective marquise de Tourzel, whose daughter Pauline was to be Marie-Therese's lifelong friend. On October 5, Versailles itself was besieged by a mob intent on finding bread (and maybe murdering the Queen). Many of the royal guard was murdered, and Marie Antoinette, after fleeing with her children through the back passages of the palace, had to face some tense moments on the balcony facing the mob. The family was forced to move to the run-down Tuileries Palace in Paris where life steadily grew more uncomfortable and dangerous, until the ill-fated flight to Varennes in 1792. After this, they were locked away in the Temple Prison. A sort of routine was established by the little family, with reading, sewing, and lessons for Marie-Therese by her mother and her aunt Madame Elisabeth. 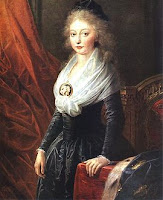 On January 21, 1793, Louis XVI, her beloved father, was executed. A few months later, in July, guards forcibly seized her little brother from the family's apartments and was horribly mistreated, left alone for days, tortured, and forced to speak against his mother and aunt (he later died in prison). After a few weeks of this agony, listening to her child cry, Marie Antoinette was taken away to the Conciergerie prison after kissing her daughter and giving her in Elisabeth's care. They would not see each other again. The Queen was executed on October 16; Elisabeth on May 9, 1794. During most of the remainder of Marie-Therese's imprisonment, she was left entirely alone and not told what happened to her family.

One the wall of her prison she wrote, Marie-Therese-Charlotte est la plus malheureuse personne du monde. Elle ne peut obtenir de savoir des nouvelles de sa mere, pas meme d'etre reunie a elle quoiqu'elle l'ait demande mille fois. Vive ma bonne mere que j'aime bien et dont je ne peux savoir de nouvelles. O mon pere, veillez sur moi du haut du Ciel. O mon Dieu, pardonnez a ceux qui ont fait souffrir mes parents. "Marie-Therese is the most unhappy creatire in the world. She can obtain no news of her mother; nor be reunited to her, though she has asked it a thousand times. Live, my good mother whom I love well, but of whom I can hear no tidings. O my father! Watch over me from heaven above. O my God! Forgive those who have made my family die."

Marie-Therese left her prison on December 18, 1795, the day before her 17th birthday, in a prisoner exchange with Austria. She arrived in Vienna at the court of her cousin, Emperor Francis II, on January 9, 1796. She later left Vienna to live at Mitau in Courland (now Latvia), to join her father's eldest surviving brother, comte de Provence, now Louis XVIII of France. He arranged for her to marry his nephew (her cousin) Louis-Antoine, duc d'Angouleme. He was a shy, slow young man, one his father, comte d'Artois, considered something of an embarrasment, but Marie-Therese seemed happy enough to marry him and bind her family closer together. They married at Jelgava Palace in 1799, but never had any children.

Soon after the French royal family moved to England and settled in Hartwell House in Buckinghamshire, the court in exile (though her father-in-law spent most of his time in his apartment in Holyrood House in Edinburgh). They returned to France at last when Napoleon abdicated in 1814 and Louis XVIII took the throne (21 years after the death of Louis XVI). On January 21, 1815, the remains of Marie-Therese's parents were exhumed from the hasty graves at Madeleine cemetery and laid to rest at Saint-Denis. Meanwhile, while happy to be "home" at long last, Marie-Therese was also emotionally exhausted from dealing with Frenchmen who may have supported Napoleon or even the Revolution, and fending off demands from people claiming to be her long-lost brother (she never met with any of them).

In 1815, Napoleon returned, and the King fled France once again. Marie-Therese, who often went on tours of the country to see the people, was in Bordeaux at the time and tried to rally the troops to no avail. At first she refused to leave, despite Napoleon's orders for her arrest when his army arrived, but she finally agreed to leave to spare Bordeaux destruction and chaos. Napoleon then remarked she was "the only man in her family." After Waterloo, the royal family was restored yet again and they returned to France.

In February 1820, the comte d'Artois's younger son, the dashing duc de Berry, was assasinated. His son was born to the duchesse a few months later (this child would later be the comte de Chambord, pretender to the throne). Louis XVIII died in 1824 and was succeeded by the comte d'Artois as Charles X. Marie-Therese's husband was now heir to the throne, and she was Madame la Dauphine. This didn't last long, though; conservative, arch-monarchist Charles X was very unpopular, and in the Revolution on July 1830 (which lasted 3 weeks) he abdicated in favor of his son, who abdicated in favor of his nephew, but it was Louis-Phillipe duc d'Orleans who became King.

On August 4, Marie-Therese went into exile again and forever, sailing for Britain with her husband, uncle, her little nephew and his mother, and his sister Princess Louise-Marie-Therese (who would grow up like a daughter to her). They lived in Edinburgh, followed by Schloss-Hradschin in Austria. Charles X died in Italy in 1836, nursed by his niece. Her husband followed in 1844, and Marie-Therese went to live outside Vienna at the Schloss Frohsdorf, where she looked after her niece and nephew, walked, read, sewed, prayed, and had quiet parties, finding a measure of peace in a tumultuous life. She died October 19, 1851 or pneumonia and was buried next to her uncle and husband at the Franciscan Monastery church of Kostanjevica in Gortz. (Her gravestone calls her the Queen Dowager of France, in honor of her husband's 20-minute rule).

Two good biographies are:
Susan Nagel, Marie Therese, Child of Terror (2008)
Alice Curtis Desmond, Marie Antoinette's Daughter (1967)
Marie-Therese also wrote her own memoirs, Duchess of Angouleme's Memoirs on the Captivity in the Temple and Memoir on the Flight to Varennes
Posted by Amanda McCabe/Amanda Carmack/Laurel McKee at 12:13 AM

I've always thought her story was so sad. I remember reading about her when I researching Marie Antoinette and Axel Fersen. He tried to see her in Vienna, when he attempted to be reimbursed for the money he'd spent trying to rescue the Royal Family. He only saw her briefly, and he found her cold and unapproachable, after an initially warm meeting.

What an interesting post. Popular history overlooks the children of Marie Antoinette. I had never heard of the make-up or fate of the family. What a sad life she had as a teen.
Thank you for an informative article. I'll have to look for those 2 books.

I really enjoyed both the bios of Marie-Therese--she really did have a very sad life. Her marriage was not especially happy, and she had lots of upheaval and turmoil as well as never really getting over what happened to her parents and siblings (of course). Yet she also seems to have been very strong and resilient