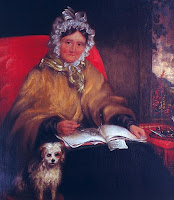 I hope you've all had a wonderful holiday! Around here the weather was quite frightful--snow, ice, blowing blizzard conditions. I was stuck at my parents' house for a few days! But I had a wonderful time drinking Prosecco and watching the Say Yes to the Dress marathon on TLC, because nothing says Christmas like bitter family fights over over-priced white strapless dresses.

December 25 is also the birthday of this weekend's Heroine, Dorothy Wordsworth! She was born in Cockermouth, Cumberland in 1771. Her mother died early, and her father died in 1783, causing Dorothy and her 4 siblings (including her favorite brother poet William) to be farmed out to various relatives. Dorothy went alone to live with her aunt, Elizabeth Threlkeld, in West Yorkshire. She was able to reunite with William in Dorset in 1795, and in 1797/98 at Somerset, where they determined to live together as a family again, even if at first they had to live in poverty. 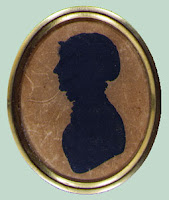 Dorothy was also a poet and a diarist, though she showed little interest in becoming famous like her brother. She wrote "I should detest the idea of setting myself up as an author, and give Wm. the Pleasure of it." She did almost publish an account of travels with her brother in Scotland in 1803, but it was not published until long after her death in 1874, as Recollections of a Tour Made in Scotland.

She never married, and after her brother married in 1802, to Mary Hutchinson, Dorothy continued to live with them and help look after their children. She also continued to write and explore the nature she loved. She died in 1855 at the age of 83, after having been an invalid for many years. Her Grasmere Journal was spublished in 1897, a journal describing her daily life in the Lake District, the walks she and her brother would take in the country, and portraits of the literary figures they befriended such as Coleridge, Southey, Scott, and Charles Lamb. This Journal led to a re-examination of her role in the world of the Romantic poets and how vital she was to her brother's success (for instance, he often relied on her detailed accounts of the natural world when writing his poems, and borrowed freely from her journals).

Some great sources include:
Kathleen Jones, A Passionate Sisterhood: Wives, Sisters, and Daughters of the Lakeland Poets (I love this book!)
Frances Wilson, The Ballad of Dorothy Wordsworth: A Life
John Worthen, The Gang
Posted by Amanda McCabe/Amanda Carmack/Laurel McKee at 10:52 AM