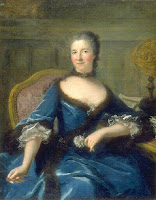 FindingAda.com has declared March 24 to be Ada Lovelace Day, "an international day of blogging to draw attention to the achievements of women in technology and science." Last year's day had over 2000 participants, and since this is a topic very close to my heart I hope they have many more this year! My own contribution is this Heroine of the Middle of the Week, one of my favorite historical women of science Madame du Chatelet, French mathematician, physicist, and author.

Gabrielle Emilie Le Tonnelier de Breteuil, marquise duChatelet was born on December 17, 1706 in Paris. Her father was Principal Secretary and Introducer of Ambassadors to King Louis XIV, a position that gave his family great status at Court and also put them at the center of nobility and intellectual leaders of the day. One of her father's friends was Fontenelle, perpetual secretary of the Academie des Sciences, who would talk astronomy with little Emilie when she was only 10 years old. Unusually for parents of the time, they recognized and encouraged their daughter's early precocity and arranged for tutors and also lessons in fencing and riding. By age 12 she was fluent in Latin, Italian, Greek, and German; she went on to publish translations of Greek and Latin plays and works of philosophy. She was also educated in dance and music (which she loved), mathematics, literature, and the sciences, and made enormous and quick progress. At that point her mother, Gabrielle-Anne de Froulay (who had received only the usual cursory convent education) became concerned about her daughter's unseemly intellectual pursuits and tried to have her sent to a convent. 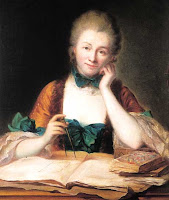 On June 12, 1725 she married the Marquis Florent-Claude du Chastellet-Lomont (which later became the more known Chatelet). She had little in common with her new husband, but they seemed to get on well enough and were able to fulfill their duties. They had 3 children, after which Emilie considered her duty done and arranged to live separately from her husband while still maintaining appearances. The marquis was a military man and governor of Semur-en-Auxois in Burgundy, so often away from home anyway. Both spouses took lovers. At 24 Emilie fell in love with the Duc de Richelieu and embarked on a year and a half affair with him. The duc was also interested in literature and philosophy, and the two of them enjoyed intellectual debate. He introduced her to the works of Isaac Newton and inspired her to take more lessons in higher mathematics. She took geometry classes from Moreau de Maupertuis from the Academy of Sciences, and became very interested in the new theories. (She also used her mathematical knowledge in a practical way! After losing a tremendous amount of money to card cheats at a party at Fontainebleau, she repaid her debts by devising a financing arrangement similiar to the modern idea of derivatives, where she paid tax collectors a fairly low sum for the right to their future earnings, as they were allowed to keep a portion of the taxes they collected for the king, and promised to pay the court gamblers part of these future earnings).

Emilie's most famous (and longest lasting lover) was Voltaire. They were true partners in study as well as love, studying physics and mathematics. She also began to publish scientific articles and translations in their years together, where they lived most of the time at Emilie's estate of Cirey-sur-Blaise in northwestern France. Their friends and fellow intellectuals often joined them there for long house parties of scientific discussions and amateur theatricals!

In 1737 Emilie published her paper Dissertation sur la nature et la propagation du feu, based on her research into the nature of fire, which predicted infrared radiation and the nature of light. In 1740 she published her book Institutions de Physique, a review of new ideas in science and philosophy which she intended to be studied by her 13-year-old son. She combined the theories of Gottfried Leibniz and the observations of Willem Gravesande to show that "the energy of a moving object is proportional not to its velocity" (as had previously been believed by Newton, Voltaire, and others) "but to the square of its velocity." In the year of her death, she finished her crowning achievement, her translation into French, with her own commentary, of Newton's Principia Mathematica, including her derivation from its principles of mechanics the notion of conservation of energy. Her work is still the standard translation used in French education.

Emilie died on September 10, 1749. Her last affair, after the break-up of the relationship with Voltaire, was with the young poet Jean Francois de Saint-Lambert, and she died 6 days after giving birth to their daughter at age 42. She was only at the beginning of her important work.

A couple great online sources on her life can be found here and here. I have a couple of great recent biographies that I've used to dig up this information and highly recommend! Passionate Minds: The great love affair of the Enlightenment, featuring the scientist Emilie du Chatelet, the poet Voltaire, sword fights, book burnings, assorted kings, seditious verse, and the birth of the modern world by David Bodanis (how can you resist that title??) and La Dame d'Esprit by Judith P. Zinsser.

Who is your favorite woman of science?
Posted by Amanda McCabe/Amanda Carmack/Laurel McKee at 12:56 AM

I just posted Cara's contribution on Ada over at Scandalous Women. 2 other good books about Emilie (which I read while preparing my chapter on her for Scandalous Women) are Voltaire in Love by Nancy Mitford and Divine Mistress.

Oh, and the Chateau where she lived with Voltaire has a web-site.