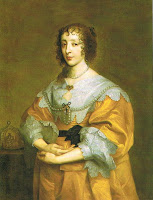 Today marks the anniversary of Charles I's ascension to the British throne, so I thought we would take a look at Queen Henrietta Maria for our Heroine of the Weekend! Though perhaps not everyone's ideal of a heroine (she was said to be rather cranky, for one thing!) she was valiant in fighting for her husband and theirs was a true love story (a rarity in royal circles).

Henrietta Maria was born on November 25, 1609 in the Louvre, the daughter of King Henri IV of France and his wife Marie de Medici. She was brought up in luxury as a Fille de France, and she and her elder sister Elisabeth were considered beauties and great "catches" on the royal marriage market. Before she was a year old, her father was assasinated and her brother became King Louis XIII; her mother was eventually banished from the court in 1617, and in 1619, when Henrietta's oldest sister married, she took on the high title of Madame Royale. 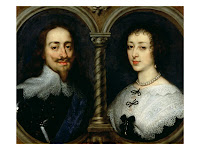 Henrietta met Prince Charles of England, son of King James I, in 1623, when he was on his way to Spain to try and arrange his own marriage with the Infanta Maria Anna, which ended badly (the Infanta's father demanded that not only should Charles convert to Catholicism but he should also stay in Spain for a year after the wedding to insure England's compliance with the treaty. Charles declined). Charles then looked to France for a suitable bride, and remembered the pretty young princess. They were married by proxy on May 11, 1625, a couple months after Charles became king and despite the problem of Henrietta's own Catholic religion, which she refused to give up. They were married in person at St. Augustine's Church, Canterbury on June 13, but her religion made it impossible for her to be crowned with him in an Anglican service. She maintained her own private chapels where she and her household could hear Mass.

At first their marriage was not "all that." Henrietta was strong-minded, and they often quarreled and had misunderstandings. She had brought a very large and costly retinue with her from France, most of which Charles sent home, allowing her to keep only her chaplain and 2 ladies-in-waiting, which caused a great deal of strife. Henrietta also took an instant dislike to her husband's best friend the Duke of Buckingham. But after Buckingham's death in 1628 their relationship improved steadily, and they came to understand and love each other very much. They had 7 children, of which 3 sons and 3 daughters survived infancy Despite the fact that her religion often alienated her from some of the powerful courtiers, and even from the English people, she took on more and more of a part in national affairs as matters came to a boil in the 1630s. She hated Puritan courtiers and Parliamentarians who would take away any of the powers of the king.

When war broke out in August 1642 she was abroad raising money and support for the Royalist cause, and she did not return to England until early 1643, landing at Bridlington in Yorkshire with troops and arms. She stayed with the army in the North for several months, making her headquarters at York, before joining her husband at Oxford where his armies were in retreat. After the Scottish intervention on the side of Parliament, and Charles's refusal to accept their terms for a settlement and determination to fight on, Henrietta fled back to France with some of her children, leaving in July 1644. She never saw her husband, who was executed in 1649, again, but she never stopped trying to raise support for him. 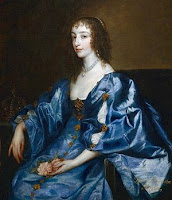 She settled in Paris, left almost destitute in her exile and increasingly bitter about her husband's death and the loss of her position. She returned to England after her son's restoration to the throne as Charles II, and lived as "Dowager Queen" at Somerset House in London before returning to France in 1665. Pepys described her at this time as a "very little plain old woman, and nothing more in her presence in any respect nor garb than any ordinary woman." In her younger days, though, she had been very fond of masques and dances, and beautiful clothes. She founded a convent at Chaillot with her generous pension from England and lived out her final days there. Through her daughter Henrietta Anne (Minette), who married the duc d'Orleans (brother of Louis XIV) Henrietta became the maternal forebear of not only the French royal family but also that of Spain and Luxembourg.

She died at the Chateau de Colombes near Paris on September 10, 1669 and was buried in the royal vault at St. Denis.

Poor Henrietta Maria. Did you ever see the Last King with Rufus Sewell as Charles II? Diana Rigg plays HM and not very well. I found a cool Marie Antoinette blogger template if you are interested.