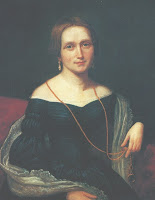 This weekend in history is rich in heroines' anniversaries! Louisa May Alcott died on this date in 1888, and almost 100 years later Georgia O'Keefe died in 1986. I love both these women and their work, but I decided to look at a woman I didn't know much about, Norwegian author Camilla Collett, who died March 6, 1895. Her novel The District Governor's Daughters is considered Norwegian literature's "first modern novel" as well as one of it's first feminist works. In A History of Norwegian Literature (ed. Harald Beyer) the novel is described as "a demand for the emotional and intellectual liberation of women" and "a breakthrough for the cause of sexual equality in Norway."

Collett was born in Kristiansand, on the southern coast of Norway, in 1813 to a well-known, well-connected family (her brother was poet Henrik Wergeland). In 1817 the family settled in the town of Eidsvoll when her father, Nikolai Wergeland, was appointed the Lutheran pastor there. Nikolai was a progressive man, very involved in the independence movement (Norway declared its independence from Sweden and Denmark in 1814), who believed his daughter should be as well-educated as his son. She went to the Herrnhut Institute to study, while her brother (5 years older than her) became a celebrated literary figure whose poetry and plays celebrated Norwegian identity, which not everyone appreciated. He carried on a long feud with one of his fiercest critics, Johan Sebastian Welhaven. What made this feud even more scandalous was that Camilla was becoming romantically involved with Welhaven! This romance eventually cooled, and they each went on to marry others.

In 1834, Camilla went to France to study literature, and in 1841 she married Jonas Peter Collett (who was over 40 years her senior, and a high-ranking government minister!). Her brother died in 1845, and her husband in 1851, leaving her alone in the world with 2 young sons and financial difficulties. She soon after moved to Copehagen and wrote her novel, The District Governor's Daughters. It was published anonymously in 1854-55, and tells the tale of Sofie Ramm, who falls in love with Georg Kold, a tutor to her younger brother. The young lovers believe marriage should be based on love and not on family arrangements, but they are torn apart and Sofie forced to marry another, which leads to a life of misery. The introduction to the English translation (published in 1992) calls it a "portrait of the rigid Scandanavian society of the period," and remarks on its influence on the plays of Ibsen. It says, "Stylistically it bridges romanticism and realism...Jane Austen's comedies of manners and Charlotte Bronte's headstrong heroines coliding with Victorian ethics of female self-sacrifice." 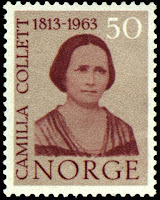 It was also the first work in Norwegian literature to center on the lives of women at a time when women in Norway had almost no legal rights. A History of Norwegian Literature states, "she demanded a change of attitude, an understanding of the woman's heart. Into this she flung all her glowing passion, writing with bitterness and sympathy and an amazing boldness."

Camilla lived out the rest of her life in a variety of European cities like Stockholm, Berlin, and Paris, writing works of non-fiction and political essays. In 1885 she returned to Norway, and at her 80th birthday party in 1895 she was escorted by Ibsen himself. She died March 6, 1895.