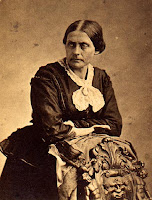 This week's heroine is women's rights pioneer Susan B. Anthony (February 15, 1820--March 13, 1906), who died on this date 104 years ago. Some good biographical info can be found at the Susan B. Anthony House website--I thought we'd look at some favorite Susan B. quotes here...

The older I get, the greater power I seem to have to help the world; I am like a snowball--the further I am rolled the more I gain. 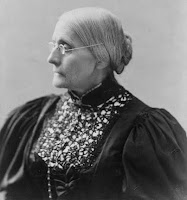 The fact is, women are in chains, and their servitude is all the more debasing because they do not realize it.

Modern invention has banished the spinning wheel, and the same law of progress makes the woman of today a different woman from her grandmother.

There is not the woman born who desires to eat the bread of dependence, no matter whether it be from the hand of father, husband, or brother; for any who does so eat her bread places herself in the power of the person from whom she takes it.

Cautious, careful people, always casting about to preserve their reputation and social standing, never can bring about a reform. Those who are really in earnest must be willing to be anything or nothing in the world's estimation, and publicly and privately, in season and out, avow their sympathy with despised and persecuted ideas and their advocates, and bear the consequences.

I can't say the college-bred woman is the most contented woman. The broader her mind the more she understands the unequal conditions between men and women, the more she chafes under a government that tolerates it.

What you should say to outsiders is that a Christian has neither more nor less rights in our Association than an atheist. When our platform becomes too narrow for people of all creeds and of no creeds, I myself shall not stand upon it.

I always distrust people who know so much about what god wants them to do to their fellows. 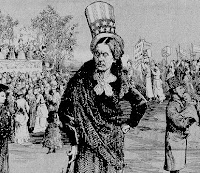 Before mothers can be rightly held responsible for the vices and crimes, for the general demoralization of society, they must possess all possible rights and powers to control the conditions and circumstances of their own and their children's lives.

Bicycling has done more to emancipate women than any one thing in the world. It gives her a feeling of self-reliance and independence the moment she takes her seat; and away she goes, the picture of untrammeled womanhood.
Posted by Amanda McCabe/Amanda Carmack/Laurel McKee at 1:55 AM