This weekend's heroine is Sarah Churchill, Duchess of Marlborough, born on this day in 1660! She lived a long and complex life, and was one of history's great "strong women."

Sarah Jennings was born June 5, 1660 to Richard Jennings, a Member of Parliament, and his wife Frances, at Holywell House in Hertfordshire. Richard met the Duke of York (later James II) while attempting to recover an estate that had belonged to his mother-in-law, and in 1664 James arranged for Sarah's sister Frances to be a maid of honor to his wife, Anne Hyde, Duchess of York. Frances later had to leave Court when she married a Catholic, but Sarah later took her place as maid of honor to Duchess #2, Mary of Moden, in 1673.

Sarah became friends with Princess Anne, James and Anne Hyde's second daughter, in 1675, the same year Sarah met her future husband John Churchill and danced and talked with him at balls and routs. John had once been the lover Charles II's chief mistress Barbara Palmer, and he was deeply in debt and not much of a catch financially. He was also said to be about to marry a rich mistress of James II, Catherine Sedley, a match promoted by his father who was eager to restore the family coffers. But in 1677, Sarah's brother died and she and her sister became the heirs to the Jennings estates, thus giving the young couple an income. They secretly married in the winter of 1677, a union known only to a few friends so she could keep her position as maid of honor. This became impossible when she was pregnant, and the marriage became public on October 1, 1678. Their first child, a daughter, died soon after birth, and Sarah became Lady of the Bedchamber to Princess Anne after the princess's marriage in 1683.

In 1688 came the Glorious Revolution, the overthrow of the unpopular Catholic King James in favor of his daughter Mary and her husband William of Orange. Amidst the initial upheaval, James ordered Anne (who he suspected of supporting her sister) and Sarah placed under house arrest, but in her memoirs Sarah described their dramatic escape: "By the backstairs which went down from her closet, her Royal Highness, my Lady Fitzharding, and I, with one servant, walked to the coach where we founf the Bishop and the Earl of Dorset. They conducted us that night to the Bishop's house in the city; and the next day to my Lord Dorset's at Copt-Hall. From there we went to the Earl of Northampton's and thence to Nottingham, where the country gathered about the Princess; nor did she think herself safe till she saw that she was surrounded by the Prince of Orange's friend." James soon fled the country altogether. 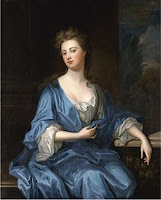 Despite this beginning, Sarah's life in the reign of William and Mary was not easy. The new monarchs gave her husband the title of Earl of Marlborough, but they still argued and Sarah's influence on Anne was thought to be too great and dangerous. Queen Mary demanded that her sister dismiss Sarah, which Anne refused (their friendship was very strong--they called each other by pet names "Mrs. Freeman" and "Mrs. Morley"), and this created a rift between the sisters that never quite healed. Sarah was evicted from her court rooms at Whitehall, and Anne left Court in response and went with Sarah to stay at Syon House. Mary died in 1694, and in an effort to ingratiate himself with the English William restored all Anne's honors and incomes and gave her an apartment at St. James's Palace. He also restored the position of the Churchills.

In 1702, William died and Anne became queen. She immediately offered John a dukedom, which Sarah refused on the grounds that their income was insufficient to the position. They were then given a pension of 5000 pounds a year for life, plus 2000 from the Privy Purse, and the dukedom was accepted. Sarah was made Mistress of the Robes, Groom of the Stole, Keeper of the Privy Purse, and Ranger of Windsor Great Park, while John became Captain-General of the army. The couple's influence was at its zenith, but during much of the reign John was abroad fighting the War of the Spanish Succession and Sarah was alone in England. She spent much of her time overseeing the building of their new estate, Woodstock Manor (later renamed Blenheim Palace), a lavish gift from the queen on John's victory at the Battle of Blenheim.

But all was not well with their close friendship as the years went on. Sarah allied herself with the Whigs, while Anne was becoming more strongly Tory, and she resented Sarah's domineering efforts to control her politically. Anne also didn't like it that Sarah was so often away from Court attending to her own business, despite Sarah's long letters and excuses. In 1703, Sarah's only son John died of smallpox, and she withdrew from publiclife even more for a time, overcome with grief. Anne was also becoming closer to another lady in waiting, Sarah's cousin Abigail Hill (who Sarah originally brought to Court in hopes of finding the impoverished girl a position), who was shy and flattering (and Tory), unlike Sarah. Anne was present at Abigail's secret wedding to Samuel Masham (groom of the bedchamber to Anne's husband) in 1707 and gave her a dowry of 2000 pounds without Sarah's knowledge. In 1711 Sarah lost her offices of Mistress of the Robes and Groom of the Stole (replaced by the Duchess of Somerset), and Abigail took over as Keeper of the Privy Purse. John also lost his positions, and the couple lost their state funding for the building of Blenheim (which came to a halt for the first time since 1705). The couple left England to travel around the Continental courts.

Queen Anne died August 1, 1714, and the Churchills returned home at last. The new king was George Ludwig, Elector of Hanover (great-grandsome of James I through his mother), who had become friends with Sarah and John when they stayed at Hanover during their travels. John regained his old position of Captain-General and Sarah became friends with Queen Caroline. She spent her time trying to find a good match for her eldest granddaughter Lady Henrietta Godolphin. When she wed the Duke of Newcastle-upon-Tyne in 1717, she went on to find good matches for the rest of her grandchildren, even though she didn't get along with her own daughters Henrietta (who later inherited the dukedom in her own right, and died in 1733), Elizabeth (who died in 1714), and Mary (who outlived her mother, though they were always estranged) very well, though she did have one favorite daughter Anne Spencer (who died in 1716).

Also in 1716 John suffered 2 strokes, and Sarah spent most of her time devoted to his care, traveling with him to Tunbridge Wells and Bath until he made a recovery. He died in 1722, and Sarah's income was considerable enough that she offered a dowry of 100,000 pounds for her granddaughter Diana Spencer to marry the Prince of Wales (which didn't work out), and she went on overseeing the building of Blenheim. Her days of controversy were far from over, though. Her friendship with Queen Caroline ended when she refused the queen access through her Wimbledon estate, which lost her the post and income of Ranger of Windsor Great Park. She was also rude to George II, thinking him "too much of a German," and her Tory enemy Walpole was now in power. But she was still good-looking and sought-after and received many proposals of marriage (including from the Duke of Somerset), which she refused in favor of independence and the memory of her husband. In 1742 she saw the fall of Walpole and the publication of a biography (which she approved) titled An Account of the Dowager Duchess of Marlborough from her first coming to Court to the year 1710.

She died on October 18, 1744 at 85 and was buried at Blenheim. Her husband was brought from Westminster Abbey to be laid by her side.

Some sources:
Ophelia Field, Sarah Churchill, Duchess of Marlborough, the queen's favorite, 2002
Virginia Cowles, The Great Marlborough and His Duchess, 1983
Posted by Amanda McCabe/Amanda Carmack/Laurel McKee at 7:33 AM