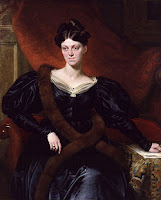 One thing I really enjoy about doing these "Heroine" posts is reading and discovering more about women in history I might have heard of but don't know a great deal about. I love seeing the wide variety of women to be found in various societies, women who followed their own dreams and talents even when it was very difficult for them. It's a great inspiration to me. So thanks to everyone for reading these posts and letting me continue with them! :)

This weekend's heroine is Harriet Martineau, a Whig writer and social theorist who was called "the first woman sociologist." She was born on this day, June 12, in 1802 in Norwich, England, the 6th of 8 children of a manufacturer. Her family was descended from Huguenots (hence the last name) and of liberal Whig, Unitarian views. She grew up educated and in an intellectual environment, but her health was not good and she became quite deaf at a very young age, which forced her to use an ear trumpet. At 16 she was sent away from home to visit her aunt, who kept a school in Bristol, in hopes that a change of scene would help her health. From 1819 to 1830 she returned to reside in Bristol, and in 1821 began writing anonymously for the Unitarian periodical Monthly Repository, with her first book, Devotional Exercises and Addresses, Prayers, and Hymns coming out in 1823 (she would eventually write more than 50 volumes, on a wide variety of subjects).

In 1826 her father died (soon after the deaths of her eldest brother and her suitor), leaving her and her mother and sisters poverty-stricken. Since her deafness kept her from teaching, Harriet took up serious writing. She went on writing for the Repository as well as short stories (later collected in the volume Traditions of Palestine), won 3 essay prizes from the Unitarian Association in only one year, and did needlework to supplement her writing income. In 1831 she published the first volume of Illustrations of Political Economy, which was a huge success, with demand increasing for each following volume. In 1832 she moved to London and moved in circles that inluded such people as John Stuart Mill, George Eliot, Edward Bulwer-Lytton, the Brownings, and Thomas Carlyle. She was also friends with Florence Nightingale and Charlotte Bronte. She finished her political economy series, another series titled Illustrations of Taxation, and stories in support of the Whig Poor Law reforms. 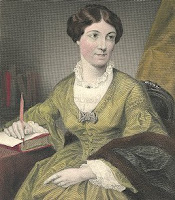 In May 1834, Charles Darwin on his Pacific voyage received a letter from his sisters saying that Martineau was "a great Lion in London" and sending him her Poor Laws and Paupers Illustrated in pamphlet size. They also said their brother "Erasmus knows her & is a very great admirer." When Darwin returned home in 1836 he stayed with his brother in London and found that Erasmus spent a lot of time "driving out Miss Martineau." The Darwins and Harriet had in common their Unitarian background and liberal Whig politics, but their father thought perhaps her views were a bit TOO liberal for a daughter-in-law and the pair never married. But Charles called on her and stated "she was very agreeable, and managed to talk on a most wonderful number of subjects" though he was also "astonished to find how ugly she is" and "she is overwhelmed with her own projects, her own thoughts and abilities". Erasmus told his brother "one ought not to look at her as a woman."

In 1834 she went on a long trip to the United States, where she became an adherent f the Abolitionists and later published Theory and Practice of Society in America and Retrospect of Western Travel, as well as an article called "The Martyr Age of the United States" in the Westminster Review. Her outspoken opinions on the evils of slavery caused a great deal of offense, but she did not care. She followed up this work with a novel, Deerbrook, a story about a surgeon hero and middle-class life.

On a trip to Europe in 1839 she fell ill, and went to stay with her sister and brother-in-law, the well-known doctor Thomas Greenhow, in Newcastle on Tyne to try and alleviate her symptoms (believed to be caused by an ovarian cyst). She then moved to Tynemouth, where she stayed for nearly 5 years in the clean sea air and wrote 3 books, including a novel about the Haitian rebel L'Ouverture and Life in the Sick Room. She loved her new telescope, which allowed her to take in the life of the town and the beach from her window (it's thought the busybody Mrs. Jellyby in Dickens's Bleak House is based on her, though she went on being friends with Dickens himself!). She wrote beautifully on her picture of the town: "When I look forth in the morning, the whole land may be sheeted with glistening snow, while the myrtle-green sea tumbles--there is none of the deadness of winter in the landscape."

In 1844 she underwent a course of the mesmerism,which she declared returned her to health within months and wrote an account of her case, which caused friction with her sister and brother-in-law, the conventional doctor! In 1845 she left Tynemouth for the Lake District and her new home The Knoll, which she would live in for the rest of her life. In 1846 she made a tour of Egypt, Palestine, and Syria and wrote Eastern Life, Present and Past, which also caused controversy with its "infidel tendency." She also published a volume called which stated that freedom and rationality, not command and obediance, should be the basis of education. She followed up with a history volume written from the view of a "philosophical Radical", Household EducationThe History of the Thirty Years' Peace, 1816--1846. She was always busy, contributing weekly to The Daily News, visiting Ireland and writing Letters from Ireland, and writing for Westminster Review. Her 1838 book How to Observe Morals and Manners laid out some of her general views, that very general social laws influence the life of any society, such as the principle of progress, the emergence of science as the most advanced product of human intellectual endeavor, and the significance of population dynamics and natural physical environment (principles which still hold true today!).

In 1855 she found she suffered from heart disease and started work on her autobiography (though she lived for 20 more years). It was published in 2 volumes posthumously in 1877. She also undertook the translation of Auguste Comte into English, which was published as The Positive Philosophy of Auguste Comte (freely translated and condensed by Harriet Martineau), which Comte himself recommeneded to his students rather than his own!