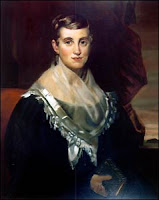 Today's Heroine is another historical woman I had never heard of before I started doing these posts, but I'm very glad to have "discovered" her now and read about her bravery and principles! I found her when I searched for "June 26 in history" and found a notation that said "Prudence Crandall arrested on this day in 1833." So of course I had to find out what she was arrested for...and I found a wealth of information on her life.

Prudence Crandall was born on September 3, 1803 to the Quaker couple Pardon and Esther Crandall in Rhode Island. When she was 17 her father moved the family to Canterbury, Connecticut where she eventually came to run her own school (after being educated herself at the Friends' Boarding School in Providence, RI). She lived a quiet, respectable Quaker schoolteacher life--until 1832.

In the autumn of that year, the daughter of local African-American farmer, a girl named Sarah Harris, asked Prudence to admit her to the school so she could learn to teach other African-American girls. Although she worried about the repercussions of this decision, Prudence did allow Miss Harris to come to the school and her worries were immediately realized--the prominent white citizens of the town pressured her to evict Harris, and when she refused the families of her white pupils removed them from the school. Prudence then opened the school exclusively to African American girls. One of her supporters, William Lloyd Garrison, wrote about the school in his paper The Liberator, announcing that in April 1833 she would open the school "for the reception of young ladies and little misses of color...Terms $25 per quarter, one half paid in advance." Other well-known early abolitionists added their names to recommend her school. Word spread, and free African American families from many states started sending their daughters to be educated. She opened with 20 pupils and the number began to grow.

The school featured reading, writing, maths, grammar, geography, history, philosophy, chemistry and astronomy, art, music, and French (a rigorous curriculum even today!), and the fee covered tuition and board. But this great endeavor was very ill-received in the town, despite its segregated nature. They held meetings to "devise and adopt such measures as would effectually avert the nuisance, or speedily abate it" and, unable to persuade Prudence to shut the school, they resorted to threats and violence. Shops refused to sell to the school; doctors wouldn't attend them; and the school's well was poisoned with feces, after which everyone refused to sell her water. On May 24, 1833, the Connecticut Legislature passed "The Black Law" prohibiting such a school (along with many other things). Prudence was then arrested and jailed for one night before being released to await her trial for the "heinous" crime of educating African American girls. (Even one of her students, 17-year-old Eliza Hammond, was arrested, though releasedon bail with the help of New York abolitionists). A local Connecticut politician said "we are not merely opposed to the establishment of that school in Cantebury; we mean there shall not be such a school set up anywhere in our state. The colored people can never rise from their menial condition in our country."

Prudence's defense at her trial (her lawyers paid for by a collection among the abolitionists) argued that the African Americans were citizens in other states and thus should be considered so in Connecticut, and thus focused on the deprivation of their rights under the US Constitution. The prosecution denied they were citizens of any state. The counry court jury was unable to reach a verdict and a second trial in Superior Court decided against the school. It then moved to the Supreme Court of Errors on appeal, which reversed the decision of the lower court. Meanwhile the school went on, despite trials and increasing violence, but when the building was set on fire Prudence realized she had to close for the safety of her family and students. It closed in September 1834.

In August Prudence had married Rev. Calvin Phileo, and when the school shut they moved to Massachusetts, followed by stays in New York, Rhode Island, lastly Illinois. When her husband died, Prudence moved to Kansas where she lived for many years. She died in 1890. Connecticut repealed the Black Law in 1838, and the state later declared Prudence a local heroine (made official in 1995!) and awarded her a pension of $400 a year. Her school building is now a museum and National Historic Landmark.