Heroine of the Weekend, Scientific Edition

For this week's Heroine of the Weekend, we'll look at TWO women, both scientists, who happened to both live in the 18th century and both die on January 9 49 years apart--Maria Gaetana Agnesi and Caroline Herschel. 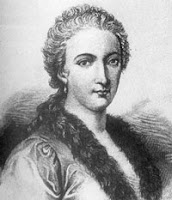 Maria Agnesi was actually more of a mathematician than scientist, having written the first book discussing both differential and integral calculus. She was also a linguist and philosopher, an honorary member of the faculty at the University of Bologna. Dirk Jan Struik called her "the first important woman mathematician since Hypatia." She was born in Milan on March 16, 1718 and recognized very early on as a child prodigy. By age 5 she could speak French and Italian; by 11 Greek, Hebrew, Spanish, German, and Latin. She also taught these languages to her younger brothers. At age 9, she composed and delivered a speech in Latin to an academic gathering on the subject of a woman's right to be educated. When she was 15, her father began gathering regular salons so she could read and discuss philosophical questions (but Maria herself was quite shy, and asked that these gatherings stop by the time she was 18 and she wanted to enter a convent). Her father refused her wish to take the veil, but did allow her to live at home in quiet semi-retirement so she could devote herself to her studies, mostly mathematics by this time. (She also educated most of her father's 21 children by 3 wives).

Her best-known work is Instituzioni analitiche ad uso della gioventu italiana, published in Milan in 1748. It analyzes finite quantities and infinitesimals. (Don't ask me to explain this at all--my mathematical knowledge ends with the 10s time tables. So of course I am terribly impressed by Agnesi's genius!). In 1750, when her father became ill, she was appointed by the Pope himself to the chair of mathematics and natural philosophy at Bologna, the first woman appointed professor at the university. When her father died in 1752, she also devoted herself to the study of theology and to charity, especially in the post of directress of the Hospice Trivulzio for Blue Nuns in Milan. Eventually she herself joined the order, and died on January 9, 1799. A crater on Venus is named for her.

(And I must think Agnesi for saving my behind in my college algebra class! I was able to get enough extra credit by writing a paper on her life and work that I saved my grade and got my degree!) 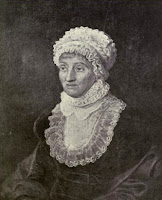 Our second lady of science today is Caroline Herschel, an astronomer best known for discovering several comets (especially the 35P/Herschel-Rigollet), and for being the sister/assistant of Sir Friedrich Wilhelm Herschel. She was born in Hanover on March 16, 1750, the 4th of 5 children (at that time George II wore the crowns of England and Hanover, so Hanoverians were also British citizens). Caroline was treated as a servant in her own family's house, her obvious intelligence ignored and ridiculed, and so she jumped at the chance to join Wilhelm in England in 1772 (where he had moved in 1766). Wilhelm was by this time an organist and music teacher in Bath, and Caroline was able to take signing lessons there. When he became choirmaster at the Octagon Chapel, she took the position of principal singer at his oratorio concerts and gained such a reputation for her work that she was offered the position of vocalist at the Birmingham festival, which she declined.

The Herschels interest in astronomy began as a hobby, but it quickly grew into an obsession. In 1782, Wilhelm became King's Astronomer to George III and moved to Observatory House. He perfected his telescope building, creating a series of larger and larger devices until he had his famous 40 foot instrument. Caroline was his constant assistant in his observations, performing calculations and making observations of her won through the telescope Wilhelm made her, a 27 inch focal length Newtonian telescope (she was especially interested in comets).

In 1788, Wilhelm married a rich widowed neighbor, which disrupted Caroline's life considerably. In the end, though, it gave her more time for her own observations, and it also gave her a beloved nephew, John. During 1783--87 she made an independent discovery of M110 (NGC 205), the second companion of the Andromeda Galaxy. During 1786-97 she discovered no less than 8 comets. In 1787, she was granted an annual salary of 50 pounds by the King.

By 1797, their observations had shown that there were many discrepancies in the much-used star catalog published by John Flamsteed (which was also difficult to use, being in 2 cumbersome volumes, the catalog itself and a book or original observations). He recommended Caroline take on the task of compiling a proper cross-reference, and the Catalogue of Stars was publisjed by the Royal Society in 1798. It contained an index of every observation of every star made by Flamsteed, a list of errata, and more than 560 stars that had not been included.

Caroline returned to Hanover in 1822, where she continued her own work on comets and also compiled a catalogue of nebulae to help her nephew in his work. In 1828 the Royal Society gave her their Gold Medal--no woman would receive it again until 1996. In 1846, at the age of 96, she was awarded the Gold Medal for Science by the King of Prussia. She died in Hanover on January 9, 1848.

Ammanda, how I adore your post!!! I'd heard of Herschel but not of Agnesi. What amazing, accomplished women!!!