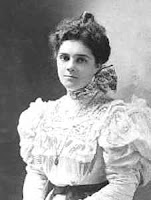 Our Heroine this weekend is Alva Erskine Smith Belmont, born on January 17, 1853! She was best-known for being really, really rich and building enormous houses (see Marble House in Newport!), but more importantly she was a major figure in the women's suffrage movement in America.

Alva was born in Mobile, Alabama to Murray Forbes Smith and his wife Phoebe, a moderately wealthy couple of impeccable lineage (Phoebe's father, Robert Desha, was a former US Representative and a general in the War of 1812). The youngest of 4 children, her two older sisters died before she was born, and her brother died in 1857, leaving her an only child. Her parents summered in Newport, Rhode Island and took lots of European vacations, eventually settling in New York City after their son's death. Alva and her mother moved to Paris when her father had to go to Liverpool for his business (who would stay in Liverpool when they could go to Paris??), where Alva attended private boarding school and absorbed the culture of Europe.

After the Civil War, the family returned to New York where Phoebe died in 1869. At a party for one of William Henry Vanderbilt's daughters, Alva's best friend Consuelo Iznaga introduced her to a Vanderbilt grandson, William Kissan Vanderbilt, and they were married soon after on April 20, 1875 at Calvary Church. Her father, whose business had suffered reverses along with his health, died soon after.

Three children were born to the marriage, Consuelo in 1877, William Kissam II in 1878, and Harold in 1884. Consuelo proved to be an exotic beauty, and Alva (extremely socially ambitious) manuevered her into marrying the Duke of Marlborough when she was only 18 years old (ironic, considering her later fight for women's rights). The marriage was annulled in 1926, when Alva testified that she forced her daughter into the union, and Consuelo went on to marry French pilot Jacques Belsan. William Kissam II became president of the New York Central Railroad Company after his father, as did Harold later on.

Soon after Alva's marriage, she hired architect Richard Morris Hunt to build an immense French chateau-style house at 660 Fifth Avenue, and later on a retreat called Idlehour on Long Island, which was added to for years. In 1891 he was hired to design the fantabulous Marble House in Newport, Alva's "summer cottage" meant to outdo her in-laws' places. This wasn't the only volley in her campaign to make the Vanderbilts as socially prominent as they were rich. Snubbed by Caroline Astor of "The 400" fame, Alva planned a masquerade ball in her Fifth Avenue chateau that would cost $3 million. After Mrs. Astor's daughter pitched a fit about not being invited, she was forced to call and thus give her approval to the upstart Vanderbilts. When she couldn't procure a box at the Academy of Music, she founded the Metropolitan Opera Association at the Metropolitan Opera House. Marble House was built next door to Mrs. Astor's comparatively puny Beechwood.

In 1895, Alva shocked society again, this time with the unheard-of--a divorce. She received several of the properties as well as a rumored $10 million (the grounds were her husband's adulteries, but some speculated he hired a woman to pretend to have an affair with him so Alva would divorce him...). In 1896 she married Oliver Hazard Perry Belmont, 5 years her junior and an old family friend (he even sometimes went on vacations with the Vanderbilts aboard their yacht the Alva). This gave her all-new architectural opportunities with renovations to their 60-room Newport mansion Belcourt and another Long Island estate, Brookholt. Oliver died in 1908, and Alva found a new passion--women's rights. 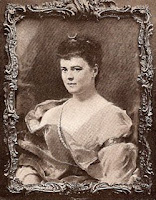 Recruited into the suffrage movement by her friend Anna Shaw (president of the National Women's Suffrage Association), Alva donated immense sums to the cause both in the US and England, founded the Political Equity League, and wrote articles for newspapers. She gave support to the strikers in New York's shirtwaist makers walk-out in 1909-10, paid the bail of picketers who were arrested, and planned a huge rally at the Hippodrome as well as paying for NAWSA's offices in New York. At Marble House in the summer of 1914 she held a "Conference of Great Women," where her daughter Consuelo (active in the cause in England) gave the speech, and she served on the executive committee of Alice Paul's Congressional Union for Women Suffrage from 1914-1916. She was later elected president of the National Woman's Party, which she held until her death (and helped them organize the first picketing at the White House).

From the 1920s on, she lived in France to be near her daughter Consuelo, with whom she had mended old wounds and formed a strong relationship, and resided in the Chateau d'Augerville La Riviere which she restored. But she didn't slow down--she formed with Paul the International Advisory Council of the National Woman's Party. She suffered a stroke in 1932 and died in Paris on January 26, 1933. Her funeral at St. Thomas Episcopal Church in New York had all-female pallbearers and large contingents of suffragists. She was buried next to Belmont at Woodlawn Cemetery.

Some sources:
Amanda Mackenzie Stuart, Consuelo and Alva Vanderbilt: The Story of a Daughter and Mother in the Gilded Age
Clarice Stasz, The Vanderbilt Women: Dynasty of Wealth, Glamour, and Tragedy
Posted by Amanda McCabe/Amanda Carmack/Laurel McKee at 12:47 AM