There is one thing I love about finding subjects for Heroine of the Weekend, and that is finding out that "heroines" come in all shapes, ages, and persuasions. They can be smart, witty, resourceful, dedicated to following their own paths, and good. They are devoted to many things--science, literature, adventure, philanthropy, fashion, their country or family. Or even religion. There is no one prototype of Heroine, and I love that! 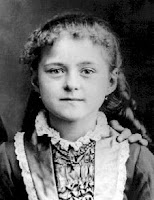 Our heroine this first weekend of 2010 is St. Therese of Lisieux, "the Little Flower of Jesus," born on January 2, 1873! She was born Therese Martin in Alencon, France, the daughter of Louis Martin, watchmaker, and Marie-Azelie Guerin, a lacemaker. Both parents were devout Catholics, though were turned away from monasteries and nunneries in their youths (Louis for not knowing Latin, Marie-Azelie because the Mother Superior felt she had no vocation to the religious life. She then asked God to send her a large family to consecrate to Him). They married 3 months after they met in 1858 and had 9 children, of which 5 daughters survived to adulthood, Therese being the youngest.

Marie-Azelie's lacemaking business was very prosperous, and eventually her husband sold his own business to his nephew and worked in the traveling/marketing part of his wife's business. In 1877, when Therese was 4, her mother died of breast cancer, and her father sold the business and moved with his children to Normandy, where his brother-in-law lived. Therese had a difficult childhood, often ill and nervous. Until age 8, she was taught at home until she could go to the Benedictine Abbey at Lisieux to continue her studies. When she was 9, her sister Pauline, who had acted as a mother to her, joined the Carmelite monastery (another sister, Marie, later entered the same monastery).. Therese wanted to enter with them, but was told she was much too young. When she was 14, she renewed her efforts to join the order, but was told the same thing--too young. Her father took her and her sister Celine to Rome for the priestly jubilee of Pope Leo XIII, and during a general audience she took the chance to press her cause to the Pope himself--who told her to do what the superiors told her.

Soon after, the Bishop of Bayeux authorized the Prioress to receive Therese, and on April 9, 1888 she became a Carmelite postulant. After a probationary period somewhat longer than average, she was given the habit on January 10, 1889 and received the name Therese of the Child Jesus. Soon after, her father suffered a stroke and was ill until the end of his life in 1894. After his death, Therese's sister Celine, who had been his nurse, also entered the convent, as did their cousin Marie Guerin. 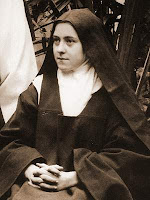 In September 1890, at her canonical examination before she professed her vows, she was asked why she became a Carmelite, and she answered, "I came to save souls, and especially to pray for priests." She was not able to live the life of a nun for long, though. By 1896 she had contracted tuberculosis, and she died on September 30, 1897 at the age of 24, in the monastery infirmary. She was buried in the Carmelite plot of the municipal cemetery at Liseux, where her parents were buried, but when she was beatified in 1923 she was returned to the Carmel of Liseux. She was canonized in 1925 and declared a Doctor of the Church, one of only 3 women to receive the honor. In 1944, she was named co-patron of France along with Joan of Arc. Her feast day is October 1.

Her position as a Doctor of the Church is based on her spiritual memoir, "Story of a Soul," which she began in 1895 as a memoir of her childhood, which grew into two parts. Later editions also feature her letters, poems, prayers, and the plays she wrote for monastery recreation. She is one of the most popular of saints today; thousands of pilgrims gather to pray in the presence of her relics as they tour the world, and there is a movement to canonize her parents (declared "Venerable" in 1994 and "Blessed" in 2004) and her sister Leonie, who died in 1941. (Therese was also one of my grandmother's favorite saints!) 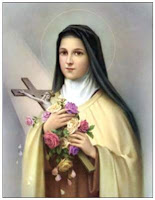 Therese wrote in The Little Way, "Love proves itself by deeds, so how am I to show my love? Great deeds are forbidden to me. The only way I can prove my love is by scattering flowers and these flowers are every little sacrifice, every glance and word, and the doing of the least actions for love."

Kathryn Harrison, Therese of Lisieux (from the Penguin Lives series)
John Clarke, OCD, trans. The Story of a Soul: The Autobiography of St. Therese of the Child Jesus
Ann Laforest, Therese of Lisieux: the way to love
Posted by Amanda McCabe/Amanda Carmack/Laurel McKee at 7:10 AM

The romantic query letter and the happy-ever-after said...

Let us praise Therese and pray she keep us in prayer. Every happiness in the new year.
Warm regards,
simone.

Not that we can all become saints, but it takes more than great people doing great things to make the world a good place to live. Those that do little things every day make life better for everyone. Many little acts of kindness can accumulate to make a very big difference.