"Somewhere in every one of us, no matter how deep it may be hidden, is a latent germ of beauty...We dance because this germ of beauty demands such expression, and the more we give it outlet the more we encourage our own instinct for graceful forms. It is by the steady elimination of everything which is ugly--thoughts and words no less than tangible objects--and by the substitution of things of true and lasting beauty that the whole progress of humanity proceeds." --Anna Pavlova


When I was younger, I was very into ballet! Classes every week, attending performances whenever I could, all of that. I still love the art form very dearly. One of my favorite heroines of those days was Russian ballerina Anna Pavlova--and now she our Heroine of the Weekend here at the blog, on the anniversary of her death (January 23, 1931). 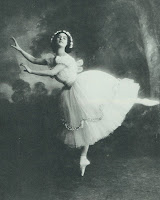 Pavlova was born prematurely on February 12, 1881 in Ligovo, a suburb of St. Petersburg, to a poor laundress named Lyubov Pavlova (the identity of her father is now known; Anna later claimed he died when she was 2, while the St Petersburg Gazette said in 1913 that her father was a banker named Poliakov, and her mother's second husband Matvey Pavlov adopted her when she was 3). Her passion for ballet was born early when her mother took her as a special treat to see The Sleeping Beauty at the Imperial Mariinsky Theater. When she was 8 she was taken to audition for the famous Imperial Ballet School; she was first rejected due to her "sickly" physique (skinny, with long, thin limbs--now the standard for ballerinas), but was accepted at the age of 10. She made her debut as a cupid in A Fairy Tale, which Petipa staged for the students of the school.

Her student years were not easy, as the rigorous technique of the Russian method did not come easily to her. The standard for ballerinas of the day was a small, strong, muscled, compact body, while Anna had very arched feet, thin ankles and wrists, and long legs. Other students called her "The broom." But she was hugely determined to succeed, taking extra classes and working long, hard hours every day. She found champions in the famed teachers Gerdt, Legat, and Ekaterina Vazem. The work paid off in her final year at the school, where she took on solo roles, and on graduation in 1899 at age 18 she entered the Imperial Ballet company as a coryphee (a rank ahead of the corps). She debuted with the company in a variation in The False Dryads, which gained glowing notices from the hard-to-please critics.

The public (and St. Petersburg was very picky when it came to their ballet!) was not sure about her style at first. The Russian style was rigorous when it came to technique, and Anna often ignored the academic rules, with poor turnout, bent knees, and incorrectly placed port de bras and turns. Her weak ankles caused her troubles, especially when she tried to emulate the athletic prima ballerinas of the day. Her style was more an old-school romantic one. Her teacher Pavel Gerdt told her "You must realize that your daintiness and fargility are your greatest assets! You should always do the kind of dancing which brings out your rare qualities instead of trying to win parise by mere acrobatic tricks." Once she did this, critic Nicolai Bezobrazov declared praise for her "natural ballon, lingering arabesques, and frail femininty," and the public were won over.


Pavlova continued to work on improving her technique, ordering specially designed pointe shoes reinforced with hard wood on the soles and the curve of the box. This is much closer to the design of modern shoes, which make pointe work less painful and much easier on curved arches.

She rose through the ranks quickly, with lead roles in Petipa ballets such as Paquita, Giselle, and Le Roi Candaule. After a great triumph in Giselle in 1906 she became a prima ballerina, followed everywhere by her legions of fans, called Pavlovatzi. When the prima ballerina assoluta (aka head girl) of the Imperial Ballet, Mathilde Kschessinska (a former mistress of Tsar Nicholas II) became pregnant, she personally coached Pavlova to take over her role of Nikiya in La Bayadere. She had an ulterior motive; she was sure Pavlova would fail in the role and her place would remain preminent in St. Petersburg. This backfired when audiences adored Pavlova, and considered that her frail, delicate look suited the ballet perfectly.

Eventually Pavlova left Russia and went on tour around the world, in search of new audiences and new challenges. She worked with Diaghilev in the early years of the Ballet Russes, but they parted ways as his company became more avant-garde (she turned down the part in Thje Firebird because she did not care for Stravinsky's modern score). She prefered a more traditional style, and by the mid-1900s had formed her own company and took it on tour around the world. Her signature dance was The Dying Swan, choreographed for her by Fokine in 1905 and set to music by Saint-Saens. She made her home in thse years in England, at a home called Ivy House in the Golders Green section of London (now the London Jewish Cultural Center), where she lived with students, company members, and Victor Dandre, her manager, companion, and maybe husband (she never said for sure).

In 1931, while touring in The Hague, Pavlova was told she had dangeroue pleurisy and required an immediate operation, but she was also told she could never dance again if she had this surgery. She replied, "If I cannot dance, I would rather be dead." She died three weeks later, at the age of almost 50. She was cremated and after a memorial service at the Russian Orthodox Church in London her ashes were placed in a niche at Golders Green Crematorium, her urn adorned with a pair of her ballet shoes.

A few good sources:
Pavlova, Portrait of a Dancer, introduction by Margot Fonteyn (this is out-of-print, but it's a gorgeous book with many lovely illustrations)
Anna Pavlova, Keith Money
Anna Pavlova in Art and Life, Victor Dandre
Posted by Amanda McCabe/Amanda Carmack/Laurel McKee at 12:13 AM