This week we continue with our look at Irish heroines (to celebrate the release of Countess of Scandal!) with Constance, Countess Markiewicz, politician, revolutionary, Irish nationalist, and suffragist (and also the first woman in Europe to hold a cabinet position, as Minister of Labour of the Irish Republic from 1919 to 1922. She was also the first woman elected to the British House of Commons, though she did not take her seat).

She was born Constance Gore-Booth in London on February 4, 1868, daughter of the Arctic explorer Sir Henry Gore-Booth and his wife Georgina, who were also landowners in Ireland, at the estate of Lissadell in County Sligo. WB Yeats was a childhood friend of Constance and her sister Eva, and they were the subjects of his poem In Memory of Eva Gore-Booth and Con Markievicz ("two girls in silk kimonos, both beautiful, one a gazelle"). In 1892 she went to study art at the Slade School in London, where she first became interested in political activisim, joining the National Union of Women's Suffrage Society. When she moved to Paris, she met her husband, Kazimierz Dunin-Markiewicz, a Ukrainian count. His first wife died in 1899, and he and Constance were married in 1901, with their daughter Maeve being born at Lissadell (the girl was raised by her grandparents and was later estranged from her mother). Constance also raised her husband's son, Nicolas, who returned to Poland as an adult.

The new family settled in Dublin to enjoy the artistic and literary circles of the city, with Constance gaining a reputation as a landscape painter and a founder of the United Artists Club. She also became involved with the Gaelic League (founded by future first president of Ireland, Douglas Hyde), a group dedicated to the preservation of Irish language and culture and also a magnet for those interested in nationalist politics. One of the members was Sarah Purser, who held a salon for artists and intellectuals where Constance met revolutionaries like Maud Gonne, John O'Leary, and Michael Davitt. In 1906, a holiday cottage was rented where the previous tenant, poet Padriac Colum, left behind copies of Sinn Fein and The Peasant, which she read and was launched into action.

In 1908, she joined Sinn Fein and Inghinidhe na hEireann (Daughters of Ireland), founded by Maud Gonne. When Constance arrived at her first meeting straight from a ball at Dublin Castle (seat of British rule in Dublin) in a gown and tiara, she was looked on with a bit of suspicion, which only seemed to make her more eager to join! She became ever more active in the suffragist cause, along with her sister. In 1909 she founded an organisation to instruct young men in the use of firearms, Fianna Eireann, and was jailed for the first time in 1911 for speaking at an Irish Republican Brotherhood gathering of nearly 30,000 to protest the visit of the king to Ireland. She founded a soup kitchen to feed poor school children, and organized meals for demonstrating workers.

In 1913, her husband moved back to Ukraine and never returned to live in Ireland, though they were never completely estranged. In 1916, she found herself at the center of the Easter Rising, holding the rank of officer in the ICA as second in command to Michael Mallin at St. Stephen's Green. She supervised the setting up of barricades and was in the middle of the fighting, wounding a sniper who fired at them from the rooftops of adjacent tall buildings. After the retreat to the nearby Royal College of Surgeons, she and Mallin held out for 6 days. They were taken to Dublin Castle, and Constance was then transferred to Kilmainham Gaol where she was held in solitary confinement. At her trial she declared "I did what was right and I stand by it." She was sentenced to death, but the sentence was commuted to life in prison. She was released in 1917 when a general amnesty was declared for those who participated in the Rising.

In less than a year she was back in jail for anti-conscription activities. In the 1918 general election she was elected for the constiuency of Dublin St. Patrick's to the House of Commons, but in life with the other 73 Sinn Fein MPs would not take her seat. She was in prison when her colleagues assembled for the first meeting of Dail Eireann, the Parliament of the Irish Republic, where she was described as being "imprisoned by the foreign enemy." She was re-elected to the Seond Dail in 1921 and served as Minister for Labour from April 1919 to January 1922. 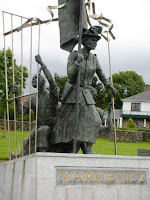 She left the government in 1922 in opposition to the Anglo-Irish Treaty, and fought for her cause in the Irish Civil War, defending Moran's Hotel in Dublin. This led to more jail time, though she was released after only about a month and returned to politics. She died on July 15, 1927, possibly of tuberculosis, with her family reunited at her side. She was buried in Glasnevin Cemetery in Dublin, with Eamon de Valera giving the funeral oration.