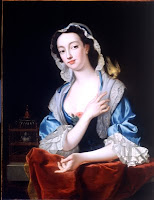 Happy Saturday, everyone! We wrap up our February of Irish heroines with a look at the actress Margaret "Peg" Woffington, born around 1720 in Dublin. Her early life is somewhat obscure, though her father was thought to be a bricklayer whose death left the family penniless, with only the money her mother could make as a laundress while Peg sold watercress in the streets.

About the age of 10 she became the "apprentice" of an Italian rope dancer named Violante, and found she had an aptitude for performance. She soon found a role as Polly in a "Lilliputian" production of The Beggar's Opera and her career was launched. Dublin was big theater city in the Georgian era--its residents loved to attend performances of all sorts, and there was much opportunity for actors and actresses in its many venues. Peg took on jobs there until about 1740, when her big hit as Sir Harry Wildair in The Constant Couple led to a job at London's Covent Garden. She later moved over to Drury Lane where she appeared for several years as one of their big stars (her biggest hit there was as Sylvia in The Recruiting Officer). Her career then took her back to Dublin.

Her best roles were comedic (she was said to have haf little aptitude for Sarah Siddons-style tragedy), breeches roles and ladies of fashion. She was also famous for her great beauty and bold lifestyle. She lived openly for many years with the famous actor David Garrick, and also enjoyed liaisons with men like the Earl of Darnley and the MP Charles Williams, which were the "talk of the town" and very scandalous! She was also friends and a sort of mentor to the notorious Gunning sisters (actresses and courtesans who went on to marry very highly), and a rival to Kitty Clive. She was president, and the only female member, of Sheridan's famous Beefsteak Club in Dublin. All this while looking after her mother and sister Mary. 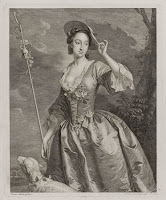 She and Garrick split in the 1740s for mysterious reasons, and she took a house in Teddington which she kept until her death. On May 3, 1757, while onstage as Rosalind in As You Like It, she collapsed of an apparent stroke. She was mostly bedridden after that, dying on March 26, 1760 at her home in Teddington and was buried there at the church of St. Mary's.

A couple good sources on her life are:
Janet Camden Lucey, Lovely Peggy: The Life and Times of Margaret Woffington
Janet Dunbar, Peg Woffington and Her World
Posted by Amanda McCabe/Amanda Carmack/Laurel McKee at 12:56 AM

What a woman! She really did have a fascinating life. I love the idea of Italian rope dancing. Must read more about that!

Glad you liked it! :) I'm actually researching for a possible Irish theater series so I'm very into this stuff right now...

Wow this for this exciting view of an amazing woman.