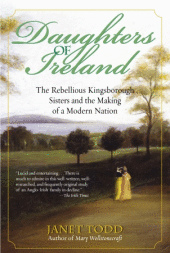 We continue our February of Irish heroines with a look at Margaret King Moore, Countess of Mount Cashell (later known as Mrs. Mason), who was a big inspiration when I was working on Countess of Scandal. She was born in 1771 to one of the most privileged families in Ireland, the 2nd of 12 children of Robert King, Earl of Kingston, and his wife Caroline Fitzgerald, who was the greatest heiress in Ireland. She and her siblings seldom saw her parents (who disliked each other, but were immensely social and loved to travel), and were mostly raised by servants, doctors, and a succession of governesses (in later life, Margaret turned against this sort of upbringing for her own children and became an advocate for a more naturalistic style). Her relationship with her parents was not helped by the fact that she grew into a tall, awkward girl, uninterested in fashion and society, very different from what her mother expected of her daughters.

This awkwardness, which would be a liability in the marriage market, prompted Caroline in 1786 to look for a new governess, a woman of discipline and strong morals, who could get Margaret into proper shape. A friend recommended Mary Wollstonecraft. In retrospect this is a strange choice for the conservative Caroline--Wollstonecraft encouraged Margaret and her sisters to seek out education and abandon the elite way of thinking of their parents, believing children should be treated kindly and with a regard for their onw unique styles and ideas (ideas outlined in her 1788 book Original Stories from Real Life). She was only Margaret's governess for a year, but later Margaret wrote she "felt an unbounded admiration because her mind appeared more noble and her understanding more cultivated than any other I have known." Wollstonecraft was dismissed after arguments between her and Caroline escalated, but Margaret and Wollstonecraft kept up a correspondence for a long time after, and her influence was felt for the rest of Margaret's eventful life. (When Wollstonecraft's daughter Mary Shelley was traveling in Italy with her husband in 1819, she stayed with Margaret in Pisa)

At age 19, Margaret bowed to her family's wishes and married Stephen Moore, Earl of Mount Cashell. They were very unhappy together, with incompatible temperments and ambitions, though they had 7 children together. Margaret raised them according to her own ideas, nursing and looking after them herself, and they all grew into healthy adulthood. She found consolation in her children, in her writing, and during the 1798 Uprising she became active in Irish politics, supporting the United Irishmen, writing pamphlets demanding Irish freedom from British rule and Catholic emancipation (despite her privileged position). After the failure of the Uprising, she and her family set off on Continental travels, though this only served to show her more of the world and further drive her apart from her husband. She also met a man named George William Tighe in Rome and fell in love.

In 1805, Margaret and her husband separated in 1805, and she was left in Germany with Tighe and her youngest daughter Elizabeth (who was still nursing). She was forced to give up her children (even, later, Elizabeth) and did not see them again, though she went on to have 2 daughters with Tighe (Laurette and Nerina). She and the earl were legally separated in 1812, and when he died in 1822 she and Tighe were married. She called herself "Mrs. Mason" (after a character in Original Stories) and went on to write her own book of tales for children, Stories of Old Daniel: or Tales of Wonder and Delight, a volume of Advice to Young Mothers on the Physical Education of Children, as well translating medical treatises from German. She started, but never finished, an epic historical novel about Ireland. She attended lectures at a medical school while living in Jena (disguised as a man), and spent the rest of her life acting as a physician and pharmacist to the poor around her and her own family. They ended up living in Pisa, where the warmer climate was considered better for her health. She and Tighe eventually lived in separate households, but were friends and companions for the rest of their lives.

Margaret died in Pisa in 1835, an independent spirit to the end.

Some sources for Margaret King's eventful life include:

Edwin McAleer, The Sensitive Plant: A Life of Lady Mount Cashell (the title is taken from the poem by Shelley, dedicated to her)
Janet Todd, Daughters of Ireland: The Rebellious Kingsborough Sisters and the Making of a Modern Nation
Posted by Amanda McCabe/Amanda Carmack/Laurel McKee at 12:56 AM

Hello, I was directed here by Elizabeth at Scandalous Women and much enjoyed this brief synopsis on the life of this feisty lady.

I will call back again, many thanks

Thanks so much for visiting the blog! I do a Heroine profile every weekend...