Heroine of the Weekend One 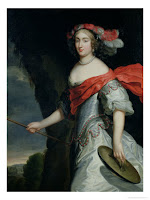 Our heroine this weekend is La Grande Mademoiselle, born on May 29, 1627!

Anne Marie Louise d'Orleans, petite-fille de France, duchess of Montpensier (plus a slew of other titles), was called just "Mademoiselle" until the birth of Mademoiselle d'Orleans, daughter of Louis XIV's brother, after which she became "La Grande Mademoiselle," was born in the Louvre to Gaston duc d'Orleans, brother of Louis XIII, and Marie de Bourbon, duchess of Montpensier, who was daughter and only heiress of Henri de Bourbon, and who passed on her title to her daughter. She died soon after her daughter's birth, and she had little contact with her father as he was always in trouble with schemes to seize the throne of France. As a child, she was told she would probably be married to Louis XIV (11 years her junior) and thus gain the throne herself, but that never worked out (nor did other schemes to marry her to foreign royalty, including Charles II of England), and she was known for her temper and willfulness.

When she was 21, the rebellion of the nobility against the child king known as the Fronde broke out. Since she bore great enmity to the Queen Mother's advisor Cardinal Mazarin, she sympathized with the rebels and joined their cause. She herself took the city of Orleans on March 27, 1652. She wrote the tale in her memoirs of how, having failed to gain entry through the gates of the city, some boatmen on the banks of the Loire outside the city offered to break open a gate on the quay and passed her through the hole into the city, which surrendered to her. Soon after she had to retreat to Paris, where she commanded the Bastille and the adjoining part of the city walls. On July 2, 1652 there was the battle of the Faubourg Saint Antoine, between the Frondeurs commanded by Conde and the royal troops. Mademoiselle saved Conde and his troops by giving orders for the gates under her command to be opened and for the cannons of the Bastille turned on the royalists. After the battle she stayed at the Hotel de Ville and played mediator between the two opponents.

But her moment of military glory came at a high price. From 1652 to 1657 she was exiled from Court, as was her father, who installed himself at the Chateau de Blois, and they were always mistrusted by Louis XIV. During her exile she lived on her many estates, especailly at the Chateau de Saint-Fargeau in Burgundy, an inheritence from her mother, and directed many renovations and extensions. In 1657, the king granted her a pardon and she returned to Court. There were more marriage schemes for her, but she was way past the age when most princesses are wed, so she concentrated on intellectual pursuits. Until she met a nobleman named Antoine Nompar de Caumont, duc de Lazun, and embarked on an affair with him. 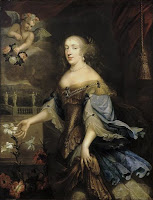 In 1670, after many years as a couple, Mademoiselle asked the king's permission to marry Lazun. Permission was granted, but then later rescinded, and not long after the duc was imprisoned in Pignerol. 10 years would pass before she could buy his release in 1681. By then he was nearly 50, and she was 54. In 1684 she broke up with him and never saw him again, though the reason is not entirely known. After this, she retreated from public life and lived quietly at her Paris residence of the Luxembourg Palace, where she died on April 5, 1693. She was buried with other royals at Saint-Denis.