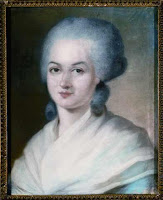 Our heroine this weekend is French writer and political activist Olympe de Gouges, born May 7, 1748! She was born with the much duller name of Marie Gouze into a middle-class family in the town of Tarn-et-Garonne in southwestern France (her father was butcher, her mother the daughter of a cloth merchant). She believed she was the daughter of the Marquis de Pompignan, who rejected her claims.

In 1765 she married a man named Louis Aubry, a cook who came from Paris with the new Intendant of her town. In a semi-autobiographical novel, Memoire de Madame Valmont contre la famille de Flaucourt, she later wrote, "I was married to a man I did not love and who was neither rich nor well-born. I was sacrificed for no reason that could make up for the repugnance I felt for this man." So it was probably not a love match! Luckily for her, this husband died after about a year and she moved to Paris in 1770 with her son Pierre. She took on the name of Olympe de Gouges and embarked on a new life.

Around 1773 she met a wealthy man named Jaques Rozieres and embarked on a long relationship with him. She also entered the world of the Paris salons, where she befriended many writers (such as La Harpe and Chamfort) as well as budding politicans like Brissot and Condorcet. She was welcomed into the salons of Marquise de Montesson and Comtesse de Beauharnais, who were playwrights and encouraged Olympe's own talent. By 1784 she was writing essays and plays, such as the anti-slavery Zamore and Mirza (which was not performed until 1789). As an advocate of human rights she was initially enthusiastic about the Revolution, but became very disenchanted when that egalite was not extended to women, when in fact women's rights took a step backward.

In 1791 she joined the "Society of the Friends of Truth," which advocated equal political and legal rights for all citizens--including women. The members often met at the hom of Sophie Condorcet, who eventually met the same fate as Olympe in pursuit of their ideals. In response to the Declaration of the Rights of Man and of the Citizen she wrote her famous Declaration of the Rights of Women and the Female Citizen, where she declared "A woman has the right to mount the scaffold. She must possess equally the right to mount the speaker's platform." She was angry that the new constitution didn't consider women's suffrage or issuses like legal equality in marriage, the right for a woman to divorce her spouse, and her right to property and custody of children. She followed up with her Contrat Social proposing marriage based only on gender equality.

As the Revolution went on she became louder in her ideals. On June 2, 1793 her allies the Girondins were arrested by the Jacobins and sent to the guillotine. She responded with an inflamatory poster, The There Urns, or the Salvation of the Country, which led to her own arrest. She spent 3 months in jail, managing to publish through her friends two works, Olympe de Gouges au tribunal revolutionnaire, where she detailed her interrogations, and Une patriote persecutee condemning the Terror. The Revolution had long since taken an anti-intellectual, anti-women turn, and Olympe was sentenced to death on November 2, 1793 and executed the next day, irnoically for "opposition to the death penalty."

After her death her son, General Pierre Aubry de Gouges, went to the West Indies with his wife and 5 children. He died in 1802, and his widow died on the return voyage to France. The daughters married in the islands, Genevieve de Gouges to an English officer and Charlotte de Gouges to the American politician Robert Selden Garnett, a member of Congress with plantations in Virginia. On March 6, 2004 the junction of 4 streets in Paris was renamed Place Olympe de Gouges.