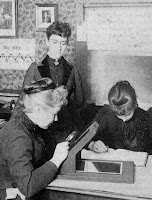 This weekend's heroine is astronomer Williamina Paton Stevens Fleming, born on this day in 1857 in Dundee Scotland! She was sent to public schools there in Dundee until the age of 14, when she became a pupil-teacher until her marriage to James Fleming in 1877. Soon after the marriage they moved to Boston, though her scummy husband abandoned her a year later while she was pregnant with their son Edward (boo!). 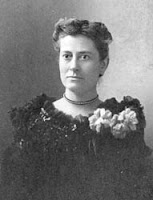 Forced to support herself and her infant, she found a job as housekeeper to Edward Pickering, director of the Harvard Observatory. An ambitious and driven man, he was often frustrated with his employees and assistants, and one day in a fit declared even his maid could do a better job than them! Fleming soon proved he was quite right. In 1881, she left housework to help Pickering with his clerical work and mathematical calculations at the Observatory. While working there she devised a system of assigning stars a letter according to how much hydrogen could be observed in their spectra (a distinctive pattern produced by each star when its light is passed through a prism). Stars classified A had the most hydrogen, B the next, and so on. This system was later named in her honor, and she used it to catalog over 10,000 stars in 9 years. (Later scientist Annie Cannon improved on this method by developing a simpler classification system using temperature). 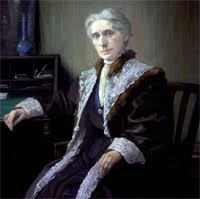 This was only the beginning of Fleming's work. She went on to discover 59 gaseous nebula, over 310 variable stars, and q0 novae. In 1888 she discovered the Horsehead nebula, though at first she and Pickering were denied their rightful credit (not corrected until the publication of the second Index Catalog in 1908). She was soon placed in charge of dozens of women hired to do mathematical computations (they were called "compuiters," and did work similar to a human computer!). She also edited the observatory's publications, and in 1899 was given the title Curator of Astronomical Photographs, the first such appointment granted to a female. In 1906 she was made an honorary member of the Royal Astronomical Society in London (the first American woman to hold that title), and was appointed honorary fellow in astronomy at Wellesley College. At the end of her life, the Astronomical Society of Mexico awarded her the Guadalupe Almendaro medal for her discovery of new stars. In 1910 she published a work on her most famous discovery, "white dwarfs." She died in Boston on May 21, 1911.

Some sources on Fleming's life:
Mabel Armstrong, Women Astronomers: Reaching for the Stars (actually a young readers' book, but fascinating! This is where I first heard of Fleming)
G. Kass-Simon and Patricia Farnes, ed. Women of Science
Veronica Stolte-Heiskanen, Women in Science
Posted by Amanda McCabe/Amanda Carmack/Laurel McKee at 2:14 AM