Our heroine this weekend is artist Mary Cassatt, born on this day in 1844! She was actually my first introduction to Impressionist art--on a school trip to a museum when I was in the third grade, I was totally captured by two of her paintings there and did a report on her life for the class. I've loved her work ever since!

Mary Cassatt was born in Pennsylvania, one of 7 children in a well-to-do family (her father, Robert Simpson Cassatt, was a stockbroker and land speculator, and her mother Katherine Johnson came from a banking family). She began her formal schooling in Philadelphia at age 6, and grew up in a household that valued travel as a part of education. The family spent 5 years in Europe where Mary saw London, Paris, and Berlin, learned German and French, and had her first lessons in drawing and music. She saw the work of French artists Courbet, Ingres, Delacroix, and Corot at the Paris World's Fair in 1855.

For females of the time, art was considered a very nice skill to have, an "accomplishment" that showed how refined and ladylike they were and increased their worth on the marriage market. Mary began studying painting at the Pennsylvania Academy of the Fine Arts at the age of 15, but her family never considered that she would (gasp!) want to become a professional artist. She herself was impatient with the lessons and the attitude of the male teachers and students toward their female counterparts. She declared "There was no teaching" there; the female students couldn't use live, nude models and mostly worked from plaster casts and did copy work. 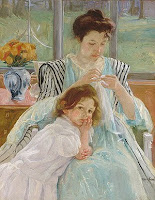 In 1866, she moved to Paris with her mother as chaperone. Women could not attend the Ecole des Beaux-Arts at this time, so she studied privately with artists, including Jean-Leon Gerome, Charles Chaplin, and Thomas Couture, and augmented her studies with daily copy work in the Louvre. In 1868 her painting A Mandoline Player, (one of only 2 paintings from these early years that can now be documented as hers) was accepted at the Paris Salon. This was a time of radical change on the Paris art scene, as artists like Courbet and Manet tried to break away from the rigidly mandated style of the Salon, and the Impressionist movement was forming.

Cassatt would be a part of this, but when the Franco-Prussian War threatened she went back to Pennsylvania to live at her family's country home at Altoona. Her father was appalled at her ambitions and refused to pay for her art supplies. Frustrated, in July 1871 she wrote to a friend, "I have given up my studio...and have not touched a brush for six weeks nor ever will again until I see some prospect of getting back to Europe." Shortly after, her work gained the attention of the Archbishop of Pittsburgh, who comissioned her to copy some Correggio paintings in Parma, giving her an advance she could travel to Europe and cover her stay in the Italian city. She then wrote in a change of tone, "O how wild I am to get to work, my fingers fairly itch and my eyes water to see a fine picture again."

Soon after her return to Europe her life brightened. Her painting Two Women Throwing Flowers During Carnival was accepted in the Salon of 1872 and got good reviews, and was even purchased. When she moved on to Parma to finish her commission she was well-received there and quite popular with the local community of artists. She then traveled to Madrid and Seville to work on a series of Spanish subjects, including the famous Spanish Dancer Wearing a Lace Mantilla, and then took up permanent residence in Paris. She was soon joined there by her sister Lydia, a semi-invalid who was a frequent subject of Mary's paintings.

But she quickly saw that the Salon was not particularly friendly to female artists, and she was outspoken in her criticism. In 1877, after both her entries were rejected, she was invited by Edgar Degas to show her works with the Impressionists, who had begun their own independent shows in 1874 (to much notoriety and loud criticism). She admired Degas's work, which she first saw in a gallery window in 1875, very much. She wrote, "I used to go and flatten my nose against that window and absorb all I could of his art. It changed my life. I saw art then as I wanted to see it." The Impressionists also had one female member already, Bertha Morisot, who became Cassatt's friend. She showed her work with them first on April 10, 1879.

In 1877, her parents joined Mary and her sister in Paris, which provided her with a household and companionship, as she had long decided to devote herself to her work and not marry. When Lydia died in 1882, Mary was bereft and unable to work for a time. Her father, though, still insisted her studio and supply expenses be covered by her sales alone, and the Impressionist shows enabled her to gain a wider audience and make a name for herself in the art world. Revue des Deux Mondes declared "M. Degas and Mlle. Cassatt are nevertheless the only artists who distinguish themselves..." in the Impressionist show. She displayed 11 works, and used part of her profits to purchase works by Degas and Monet. 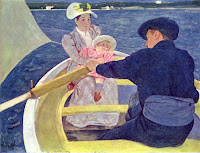 Cassatt showed in every Impressionist exhibit between 1879 and 1881, and was an active member of their circle until 1886, when she started to branch out and experiment with different techniques and styles. In 1886 she displayed 2 works in the first American exhibit of the Impressionists by the dealer Paul Durand-Ruel. She also became an advisor to wealthy American collectors, like her friend Louisine Elder, who married Harry Havemeyer in 1883 and with him set about amassing a great Impressionist collection (most of which is now in the Met). As she grew older she also became a friend and mentor to young American artists who came to Europe to study.

Her popularity was mostly built on her well-known scenes of tender domesticity between women and children, but in 1891 she displayed a series of colored drypoint and aquatint prints inspired by Japanese works shown in Paris the year before, which caused a sensation. She was also commissioned to paint a mural about "Modern Women" for the Women's Building at the World's Columbian Exposition in Chicago (which took place in 1893). The mural was lost when the building was torn down, but gained Cassatt excellent reviews.

She was awarded the Legion d'honneur in 1904, but her fame was slower to grow in her native country. In 1911 she was diagnosed with diabetes, rheumatism, and cataracts, but didn't slow down in her work until she became almost completely blind in 1914. She took up the cause of women's suffrage, and in 1915 showed 18 paintings in an exhibit benefiting the movement. She died June 14, 1926 at the Chateau de Beaufresne outside Paris, and was buried at Le Mesnil-Theribus.

Some sources on Cassatt's life and work:
Nancy Mowell Mathews, Mary Cassatt: A Life (1998)
Robin McKown, The World of Mary Cassatt (1972)
Posted by Amanda McCabe/Amanda Carmack/Laurel McKee at 6:49 AM

One of my all time favorite painters.